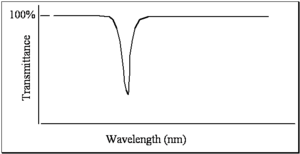 A plot of (I/I0) x 100 vs. Wavelength gives the transmittance spectra

When measuring an absorption spectrum a sample is placed in a spectrometer that has a light source with a variable wavelength. The intensity of the light can be measured with a detector as a function of wavelength or as a function of frequency. Typically in spectrometers there are literally two paths: one for reference beam and one for sample beam. The spectrum that is referred to as a transmittance spectrum can be obtained by finding the ratio of the light that is going through the sample, dividing by the light that has been unperturbed, and multiplying that by a hundred. If the molecule does not absorb any light, then all the light goes through and there is a 100% transmittance. If the molecule absorbs 99% of the light, then there is a 1% transmittance. This is one way of doing that and that is referred to as transmittance spectrum.

For reasons of unknown origins, people look at different spectra in different modes. Typically when looking at color, chemists, not physicists, look at spectra in a mode that is referred to as absorbance. But when looking at infrared spectra we typically consider them in terms of transmittance. Absorbance and transmittance are related to one another by the Beer- Lambert law.

is the absorbance (a unitless quantity),

is the path length of the sample in cm,

is the molar absorptivity or extinction coefficient with units of l-mol-1cm-1.

The log base 10 of the transmittance is equal to εcl or the absorbance. So the absorbance is simply the log of I0 over I. Keep in mind that absorbance is a unitless quantity. It turns out that absorbance can be related back to some characteristic features of the molecule and that is one of the reasons why it is used today. This formula shows that if there is a certain amount of a molecule and the path length is doubled, twice as much light will be absorbed. At least with the first order, if the concentration of a molecule is doubled, assuming that there are no intermolecular effects, twice as much light will be absorbed. Those are not molecular characteristics; they are characteristics of a sample. ε is related to how well the molecule absorbs light and it is referred to as the molar absorbtivity or the extinction coefficient. Since A (absorbance) is unitless, c is concentration given in moles per liter, and path length is typically given in cm, the units of the extinction coefficient are in: Liter mol-1 cm-1 liter or inverse molar, inverse centimeters. The extinction coefficient characterizes the ability of the molecule to absorb light of the given wavelength. It doesn’t matter whether the sample is liquid or gas. Chemist use log base 10 for the liquid phase, in gas phase spectroscopy you use an absorption cross section with a natural log. Often electrical engineers use natural logs as well.

One important question that people ask is “What is the probability my molecule will absorb light?” One way to calculate this is by plotting the absorption spectrum in energy units rather than in wavelength units. The total absorption under the band is expressed with and integral. Note that a scale that is linear in wavelength is not linear in energy.

This integration (dν) gives the oscillator strength, which refers to the probability that a molecule interacting with light over a certain energy range is going to absorb that light.

If we can say how strong is an absorption band, we can integrate it and extract out the transition dipole moment and that goes right back to the wave function of the molecules, which can be calculated quantum- mechanically. This will allow a chance to think about certain points from what we know about molecular orbital theory.

is the mean absorption frequency of the band in cm–1

, refers to the square of the transition dipole moment between the ground state and the excited state.

In classical electrostatics, the energy due to the interaction of an electric field E and a dipole is given by the dot product of the dipole moment and the electric field vector.

The dipole moment is related to the charge on an electron times the difference in charge between two things (so two separated charges that would be two, times their distance.)

is the elementary charge on the particle n (+ or -).

is the fractional charge.

is the distance of that particle from a reference coordinate

In order to get the total dipole moment in a system of many charges you have to sum over all those different vectors.

This requires the distance between the charges and the spatial distribution of the charge. Quantum mechanically the probability is related to the square of the wave function. Therefore, to figure out dipole moment using quantum mechanics we keep track of those charges with the wave function. However, we will still have this r term, the distance between them; that is going to tell us what the moment is.

Consider two electrons in p-orbitals. The distance is 2r between them. The main question here is “Where are the electrons and how can we keep track of them?” In quantum mechanics, the molecular orbital is a linear combination of the atomic orbitals. Therefore, the orbital has a certain description that is given by a linear combination. Take the integral of the wave function of the molecule times the sum of all the different charges, and multiplied again by the complex conjugate of the wave function. These track the position of the electrons in the molecule.

is the complex conjugate of the wave function

is the charge on the nth particle

The previous formula can be given more succintly as

is the charge on the electron times that distance

Odd and Even Functions and Transition Moments

In ethylene the excited state must have different symmetry than the ground state.

There are a few simple rules:

Consider the symmetry of ethylene with a π and a π* orbital with a mirror plane between them. The π orbital is even. The π* orbital is odd. The transition dipole moment operator goes as R as distance(i.e. y = x or y = R). The operator function is odd.

The ground- and excited-state wave function must not have the same symmetry if the transition dipole moment is to be non-zero.

Consider the evolution of the wave function for a particle in a box upon excitation from the ground state (with no nodes) to the first excited state with one node.

Initially the function is symmetric with respect to the axis of the one dimensional box. In the final state it is also symmetrical, however you can envision a snapshot of the system as the light field is interacting with the wave-function wherein a node begins to develop as is shown in the middle and the wave function is evolving from the initial to final state. Now consider that the electron density during process is the square of the wave function:

To relate back to real molecules think of each of those orbitals as a linear combination of atomic orbitals. One important factor is the symmetry. But there may be one other factor that will be just as important as symmetry. If you treat orbital 1 as a linear combination over n orbitals and orbital 2 as a linear combinations of orbitals as well, there will be a spatial over lap between the orbital in the ground state and the orbital in the excited state. If there is no spatial overlap between the ground state and excited state orbitals there will be no transition dipole moment. However, if the electrons are in the same place spatially, a large transition dipole moment will result.

Now if the wave functions are considered to be linear combinations of atomic orbitals then: