Photonic processes include absorption of light, fluorescence, internal conversion, intersystem crossing and phosphorescence. Each process involves the movement of quantized energy and each process has a characteristic energy range and timescale described by a rate constant. 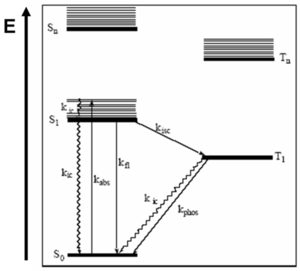 Light absorption is characterized by kabs and occurs on a time scale of ~1015 sec-1. Because the mass of the electron is much less than that of the nuclei, a good approximation is that the nuclei remain fixed on the time-scale of light absorption and then relax to new equilibrium geometries subsequent to the absorption process (Franck-Condon approximation) When looking at the electromagnetic spectrum, it is important to consider the absorption by π conjugated molecules of two or three eV in the visible. The frequency related to a photon that has an energy of 1 eV or a few 1014. This means that three electron volts results in a frequency of 1015. This immediately shows the time scale for absorption. Absorption of a photon with a few eV occurs on a time scale on the order of a femptosecond or a rate of 1015 per second.

One promising technology is the use of gold nanoparticles which exhibit surface plasmon resonance that greatly increases absorption in the visible range.

For absorption of a photon for a core electron, keV (kilo electron volts ) are used. This is the absorption that is found in an x-ray photoelectron spectroscopy. keV correspond to about 1017 or 1018 hertz. These values correspond to a timescale of attaseconds. The fastest vibrations in a molecule are the ones that are most energetic. Basically, this refers to the bond length vibrations in the order of a couple thousand wave numbers, .2 eV. These processes occur in a time scale of about 10-13 seconds, which is a few tenths of a picosecond. A molecule at 0 Kelvin temperature is vibrating on its’ lowest vibrational level. At room temperature, the molecule would be vibrating all over the place and when the photon comes by, it will be absorbed. Given the time scale for the absorption however it is as if that the geometry was frozen in time because the molecular vibrations are much slower than the absorption event. Imagine a situation where you have the molecule in its equilibrium geometry in its ground state. A photon is absorbed and the molecule moves up to the excited state. At this time, the molecule retains the geometry of the ground state. Then after a while it can relax and changes into the optimal geometry of the excited state. Once you have an idea of the energies that are involved, you can figure out the time scales and predict whether the vibrations will be coupling strongly or not.

A molecule that cannot intersystem cross (can not go to the triplet state) will remain in that singlet S1 state and then it will eventually go back to the ground state radiatively or non-radiatively.

The rate at which it goes back to the ground state radiatively over all the rates (or processes) that can take place non-radiatively or radiatively, going to the triplet and so on, gives you the fluorescence quantum yield ( Øfl) for all processes leading to loss of excited state population.

The quantum yield Ø is the probability of getting a photon emitted per photon that has been absorbed. This is the fluorescence quantum yield Ø where the summation in the denominator goes over all processes that lead to a lost of the excited state population. In order to have materials that will be good for displays, it is beneficial for the quantum yield to be as large as possible. In the case of the π conjugated molecules, most of the time the range will be in nanoseconds. But for fluorescence, the range is in microseconds as well but the systems that will be dealt with go from nanoseconds to 10 nanoseconds (109, to 108 per second). Even with up to 106 per second (microseconds), it can still be fluorescence.

Intersystem crossing is the process by which there will be a spin flip and the system can cross from a singlet excited state to a triplet excited state. If a coplanar hydrocarbon molecule is involved, the rates will be extremely slow. However, it is possible to increase the rates in a number of ways. One very efficient way is to add a heavy atom. When trying to exploit the phosphorescence, it is common to use complexes with heavy atoms such as iridium, platinum, lanthanum or europium. The reason for this is that spin orbit coupling increases tremendously with the mass of the atom. This means that the distinction between triplets and singlets is lost since everything is mixed. Due to this mixing, the rate of crossing can be very significant. It can be much faster; the Kisc is typically 10-1 – 105 sec-1. This method is called chemical substitution; essentially placing very heavy atoms in the system. However, with molecules that are not coplanar like most of the π conjugated systems, where tortions are involved, and C60 (fullerene), both of these have large intersystem crossing because of spin orbit coupling.