Absorption and emission are often used as characteristics that help identify substances. In photonics they are the core properties of molecules which make them useful. Materials can be designed that absorb light at one wavelength and emit it at another. Specific colors need to be matched to the application that the materials are intended for. Theory helps explain why molecules behave as they do and provide guidance for manipulating their design. 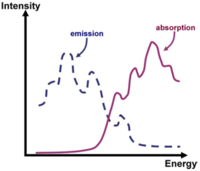 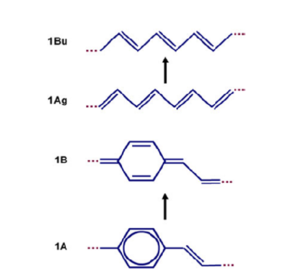 Changes in transpolyacetylene during excitation

Consider the first optically allowed excited state of the transpolyacetylene which has a 1 Bu symmetry. As the molecule moves from the ground state to that first optically excited state, there is a shift of the double bonds from one bond to the next resulting in a shift of the π bond densities from one bond to the next. This is described as the reversal of the bond length alternation pattern. If there is a single excitation on a long polyacetylene chain, that modification will be localized somewhere.

For PPV begins as a chain where the rings are aromatic-like, with single, double, single bonds between the rings. The wave functions of the HOMO and the LUMO, and the π bonding and anti- bonding pattern dictates that going to the excited state an electron leaves the HOMO and goes into the LUMO resulting in a change in the π-bond densities creating a quinoline-like structure. In between the rings, there is a double bond, single bond, double bond, or a larger factor of that kind. 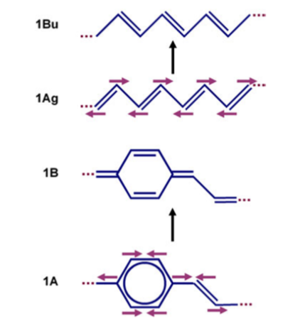 Changes in bond lengths during excitation for polyacetylene

Because of the π bond densities shifting there will be geometry relaxation when moving from the ground state to the excited state. There will be a coupling with vibrational modes, that leads from the ground state geometry to the excited state geometry. In the case of polyacetylene, these modes brings the top carbon closer to the right, the bottom carbon to the left, then the next top one to the right, bottom one to the left. The same pattern happens for PPV. In other words, there will be strong coupling to vibrational modes that correspond to C-C stretching. Remember the C-C stretching modes in those polymers are at the order of about 1400 - 1600 wave numbers and 0.15 - 0.2 eV.

Geometry relaxation in S1 of PPV5 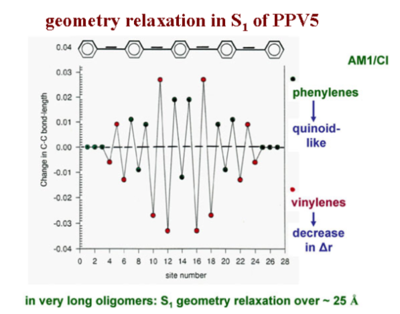 Change in bond length vs site position during excitation

Consider a linear representation of long PPV chain with about 5 rings in order to relate all the bond lengths directly with their modification, from the ground state to the excited state. This plot shows how the C-C bond length changes from the ground state to the S1 excited state in that five ring oligomer. From the plot, it can be inferred that the double bond increases significantly in length by .03 Å (angstrom), where as the single bond actually shortens by about .03 Å or more. In other words, the diagram shows the difference in bond length as you go from the optimal geometry in the ground state to the optimal geometry of the S1 state. It is clear that the vinylene double bonds increase in length and the single bonds between rings decrease in length. There is a reversal of the bond length alternation within the vinylene units. Also, within the quinoid rings, you do get an evolution of the bonds that leads you to a more quinoid structure. The geometry relaxation to form the S1 excited state in this oligomer takes place over something like 20 carbons. Polaron relaxation takes place was over about 20 carbons as does the exciton in long chains of PPV. 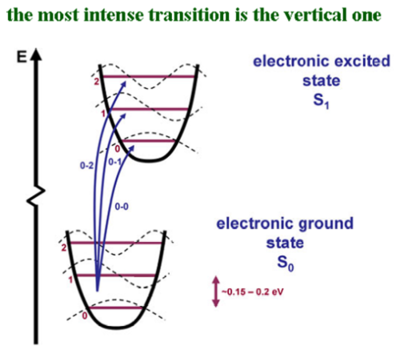 If the absorption into the first excited state of a π conjugated system is extremely sharp, there is hardly any geometry relaxation in the excited state because one potential energy curve is right on top of the other. The broadness of the absorption curve indicates a large of the change in geometry in the excited state. For instance, cyanines are important in nonlinear optics. Cyanines and thalocyanines have extremely sharp optical transitions and absorptions. This is because the geometry of the ground state and the excited state are basically identical. However, with systems like oligo PPVs or other conjugated polymers or oligomers, there are geometry relaxations that are significant in the S1 state and the two potential energy surfaces are displaced. The larger the displacement, the higher the most intense transition will be going up the vibrational level scale of the top curve.

In emission first there is absorption and then the excited state comes down to the lowest vibrational level of the lowest excited state during its life time. So the emission will take place from from the 0 level. Then, depending on the overlap of the vibrational wave functions, it will come down to levels ground state levels 2,1 or 0. But in emission, the largest energy transition (or emission) will be the 0-0. Where as in absorption, since you start with the zeroth vibrational level of the ground state, the 0-0 will have the smallest energy of the transmission. 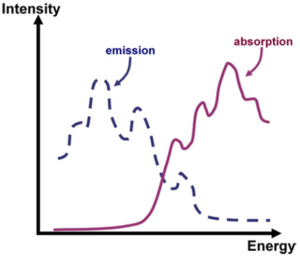 A structured emission diagram gives a clue to the vibronic progression. The difference between the energies of those two peaks can usually give you the energy of the vibrational mode that is coupled to the electronic transition. When there are several modes that are coupled, things become quickly a bit more complicated. However, in those π conjugated systems, you can do very well with such an analysis. 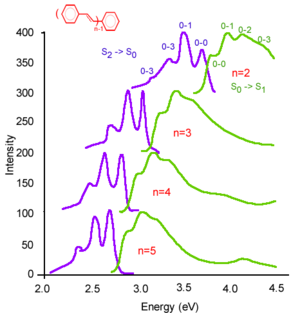 These are oligophenylene vinylenes going from two rings (n is the number of rings) to five rings. When n = 2, it is stilbene. The graph shows the redshift of the absorption as the systems becomes increasingly conjugated. Also, for the shorter species, the 0-2 transition is almost as intense as the 0-1 transition. As the chain elongates, the 0-1 becomes slightly more intense than the 0-2 but there is not much difference there. On the other hand, in the case of the emission, there is a pretty strong evolution. The stilbene 0-1 is by far the most intense where as for the five ring oligomer, the 0-0 is more intense more intense than the 0-1. This reflects something pretty simple. Think in terms of ionization: Taking away an electron from the stilbene that has 14 π electrons results in a big perturbation. Conversely, taking away an electron from a longer chain with 100 π electrons will give a smaller perturbation. The same applies for the excitation. An excitation of a very small molecule will give a pretty large perturbation. As the chain elongates the perturbation becomes less important. As the chain gets longer and longer, the excitation eventually localizes over four or five rings and ends up having the same type of relaxation beyond the five or six ring system as would occur for a very long chain.

Very often the emission curve will be sharper than absorption. The reason is that, unless it is a perfectly ordered system, usually there is some disorder so that the five ring chains can be slightly distorted in one way in one molecule and in a slightly different way in another molecule. Although the oligomers have exactly the same length, there will be a slight distribution of the optical transition depending on whether the chains are perfectly coplanar and therefore more conjugated, or the chains are more strongly twisted. This type of disorder leads to an absorption that is broader. The reason why is when you look at the first absorption band like at 8 eV, the perfectly coplanar chains can absorb at about 275 and other slightly distorted chains can absorb at 276, others at 277 and so on. 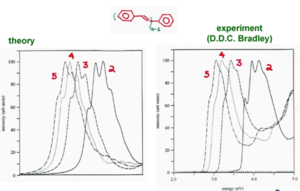 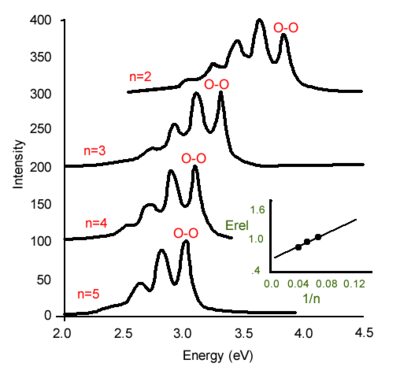