Changing the chemistry of chromophores can change the way they align in materials, how they absorb and how they polarize under the influence of a field.

Design Strategy for Modification of Chromophores

The generalized chromophore is a π-conjugated bridge (symmetric) which has been substituted with an electron donor and an electron acceptor. The substitutes induce a ground-state electron density asymmetry. When such a "push-pull" system is placed in an electric field increases it's polarization (in order to reduce its energy) and therefore changes its molecular first hyperpolarizability. 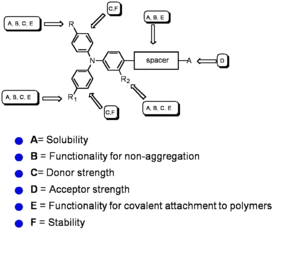 Chromophores can be designed based on theory and informed by experiment. Arylamine is the basis for this engineering example. The amine is a good donor, there is an acceptor (A) and a π bridge spacer. The letters represent locations where the molecule can be engineered to achieve desired properties:

Density function theory can be used to visualize this change in electron density in the presence of an electric field. It will be somewhere between the HOMO and the LUMO state seen here. 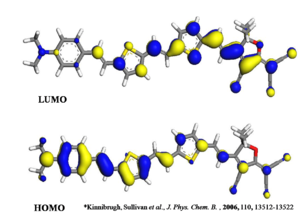 Bob Twieg showed that the decomposition temperature for diazo dyes range from 242{deg}C to 322 °C . When they replace the alkyl (aliphatic) group with an aryl (aromatic) group they increase the decomposition temperature 80-100 °C to 372-406°C. This is because chromophores containing amines with β hydrogens may be particularly susceptible to attack to degradation by singlet oxygen, due to oxidation and subsequent loss of hydrogen. Singlet oxygen is formed when dyes are excited and are able to rip electrons from nitrogen forming radical cations leading to decomposition pathways. Loss of a proton is one way these molecules begin the process of decomposition. By eliminating the C-H group you can mitigate against this process.

If you put a chromophore in an off-the-shelf polymer like polycarbonates or polyacrilinides, and you increase the concentration it will phase-separate, and the optical loss scattering will go up. The EO will disappear because of symmetry aggregation. It will also line-broaden and red shift because the dielectric environment around the chromophore is changing. When you put a polar object in a non-polar medium you have a lousy enthalpy of mixing, while your entropy of mixing is improved because you are mixing two disparate objects. But if you put a polar object in a polar host you have great enthalpy and good entropy of mixing, you get no spectral line broadening as a function of concentration, and you get no solvatochromic shifts. So not only is your EO activity improved but the optical loss is optimim because you aren’t getting any optical absorption at the telecommunication wavelengths, you're not getting phase separation so there is no scattering and your optical transparency is excellent. 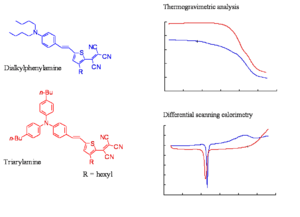 Thermogravimetric analysis shows the decomposition temperature for DPA and triarylamines

The slide shows the thermogravimetric analysis (TGA) and differential scanning colorimetry (DSC) analysis of a representative triarylamine based chromophore and a dialkylaniline based chromophore. The TGA shows the loss of mass as a function of temperature. The decomposition temperatures of the chromophore of the triarylamine chromophore is at least 50 oC higher than of the dialkylphenylamine chromophore. The triarylamines molecule starts to lose weight about 50 -60 degrees lower than DPA, this means you can work at a higher temperature and use higher Tg polymers. These molecules have one aromatic ring, one less aromatic group, a very strong acceptor, the phenyl groups to make it more stable, and butyl groups on the phenyl groups. These are present to improve the compatibility of the material with the polymer host.

Dyes can be attached after the polyimid polymer is formed

Another way to improve the stability of the system is by attaching the material to the host. Polyimid is a high temperature polymer. Alex Jen incorporated functional groups and then added a dye with a hydroxyl group. He attached the dye after the material was polymerized because the conditions for forming the polymer are quite harsh.

A dye is incorporated into the main polyimide chain

Researchers at IBM are making a dye that is extremely stable and then incorporated the dye into the main chain of the polyimide. It can then be poled at 300°C.

It appears that the ultimate achievable stability is related to the inherent flexibility of the polymer backbone and the degree of freedom in the linkage between the chromophore and the polymer (i.e., whether the chromophore is attached in the main chain or in a side chain). Thus, systems with rigid backbones and short rigid linkers will tend to have the highest Tg and also the best temporal stability.

Also, if the rigidity leads to improved temporal stability, it may lead to some degree of crystallinity which can result in significant optical losses due to scattering.

Recently the preparation of a soluble NLO substituted polyimide derivative containing this type of diaryl amino donor head embedded in a polyimide main chain was reported.

The resulting polymer is characterized by an extraordinary stability of the induced polar order, due partially to a high glass temperature (Tg ~ 350°C) of the system. However, it is not surprising that in this polymer, even prior to poling, optical losses due to scattering were relatively large. 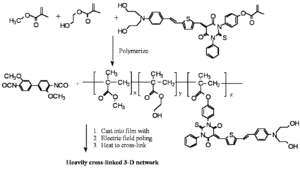 Recently, Dalton et al. have made important advances in poled materials using a "double-ended" crosslinking approach in which the chromophores containing reactive functionalities are at both donor and acceptor ends.

Sufficiently different reactive functionalities permit a two-step process to selectively polymerize the precursor polymer first, and then perform the hardening step during the curing/poling process. The OH groups off of the dye and polymer mixed with an isocyanate which reacts with an alcohol to form a bond and make a carbonate. They mix it, cast it into a film, heat it, pole it and allow the isocyanate groups to lock the chromophore into its desired orientation. 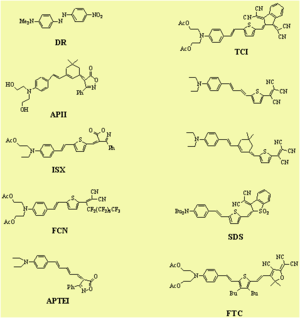 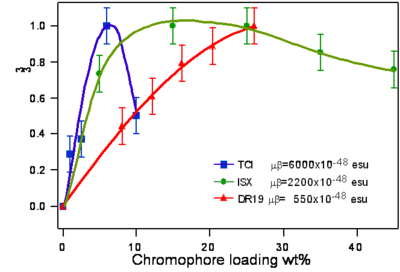 Dalton looked at a series of chromophores and plotted the r- coefficient as a function of the concentration (loading). There was a peak that is due the dipole – dipole interactions were making it difficult to orient the molecules. However with certain molecules were able to stand higher concentrations.

Poling requires a dipole to orient the molecules but large dipoles tend to oppose when they are in close proximity. Thus a balance needs to be found. 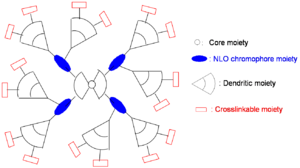 A dendrimer is alike a tree with many branches. By attaching dendrimeric groups to the chromophore it is possible to have a high concentration without the loss associated with molecules being too close. Through asymmetric shape modification and covalent chromophore attachment, high chromophore loading and r33 can be achieved. 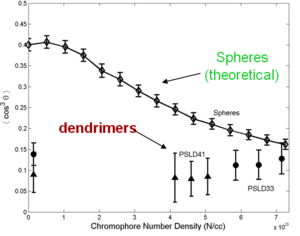 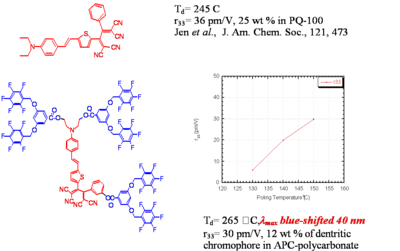 Fluorinated groups decrease optical loss at telecomm wavelength by decreasing the number of C-H bonds which have overtone absorption in this wavelength range. Notice that the molecule at the top has an r33 of 36pm/V at 25% and the other has an r33 at 12 % because the latter molecules are not allowed to get close to each other. 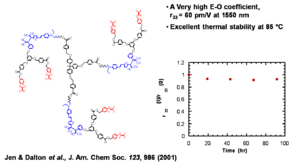 Jen and Dalton have created dendrimeric systems with trifluorovinyl groups (shown in red). These can react with each other at high temperature (170 deg) to form cyclobutanes. When the molecules are heated and poled the groups cross link and lock the chromophore into orientation.

BCOGs are formed by mixing two chromophore-containing materials (chromophores, dendrimers, or polymers) together. 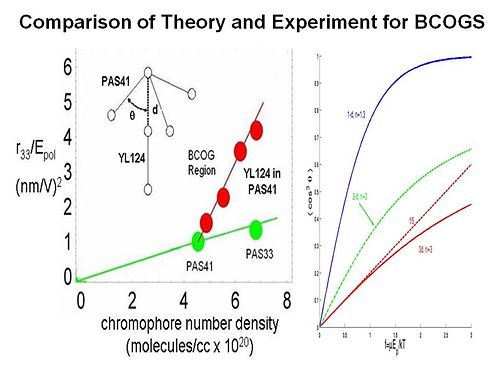 If you add two dendrimers the EO activity as a function of chromophore number density increases greatly. There are two possible reasons. There may be specifically spatially anisotropic interactions between the two components. The one chromophore is represented as a dipole with a three arm dendrimer. This a very energetically favorable interaction so it going to play a role. The electric field reacts with both components. It reduces the symmetry of organization of chromophores to 3dimensions to reduced dimensionality. The universal resolve is that order parameter as a function of poling energy is going to increase if you reduce the dimensionality of the lattice that surrounds the chromophore.

To test this idea we conducted laser assisted poling. We use a polarized laser light to selectively change the orientation of one our two components in the mixture and look at the change on the other component. We are able to see a factor of 2.5 change of the order of this chromophore as function of changing the other. This proves that there must be an electrostatic interaction between the components. This is exciting for several reasons. It allows you to achieve a dramatic increase in EO activity by exploiting the interaction between the components. For the first time you are able to directly measure the electrostatic interaction between components in a multicomponent mixture.

By using variable angle polarized absorption spectrometry you can see that the bands of different components do not overlap. You can measure the order parameter for each, change the order parameter on one and then see change on the other. From this you can back out the electrostatic potential. 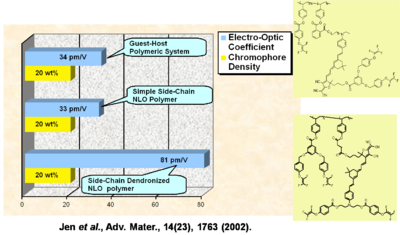 In a guest-host system, a simple side chain polymer, and a side chain dendrimer can be grafted together. The R33 goes up and the stability goes up. 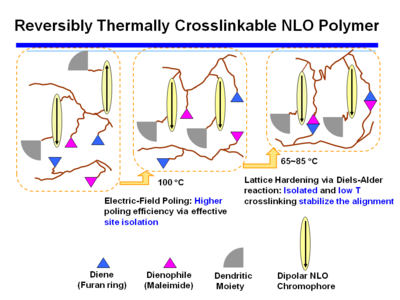 Poling at high temperature - hardening via crosslinks at low temperature

These molecules can be poled at a high temperature and then as the temperature comes down a Diels Alder reaction between a diene and a dienophile begin cross linking at a lower temperature. This hardens the lattice. Isolated and low T crosslinking stabilize the alignment. If the polymer is crosslinked you can’t dissolve it and make a film. 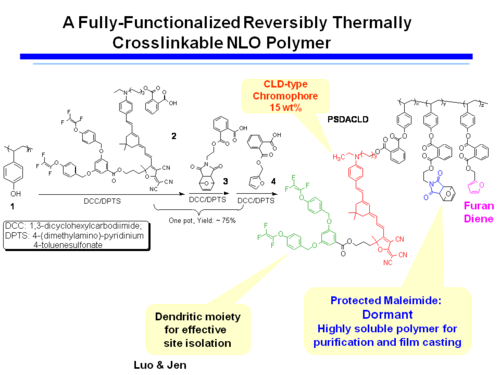 A furan group reacts with a dienophile creating a protected dienophile. As it heats up the Deils Alder reaction reverses itself creating a dienophile and the side chain of which can react an lock the molecule into place.

Dield-Alder Crosslinked Systems [6] allows you to produce material that is a highly soluble polymer for purification and film casting (because of the protected maleimide, but then can be heated, deprotected, poled and locked into place with cross linking.

Using a monolithic glass poling Alex Jen at UW has Achieved a Milestone: r33 of 500-600 pm/M. Work is in progress to improve thermal stability and mechanical properties of highly efficient EO dendrimers and demonstrate ultra-high EO performance in device stage. 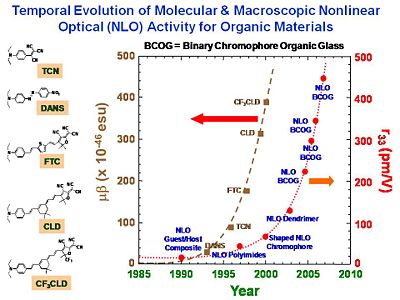 These chromophores were not dramatically more non-linear than others, but they optimized the process for orienting them. The take home message is to not get hung up with just one property (eg r33) but to think about all the properties at once. If there is an existing establishing technology a small improvement will not lead people to abandon the old one. A factor of 10 improvement will stimulate change. The STC has lots of people over many institutions who calculate the theory, design the molecules, make the molecules, measure the properties of the molecules, process materials into materials, fabricate them into devices, and then integrate the devices into a system that actually does something. You can be part of a process that is bigger than the specific process you are working on. You will learn to appreciate the challenges that other specialists have and to be able to communicate and work together. This is the reward for working in an interdisciplinary group.