The Need for Photonic Integration

This wiki is largely drawn from a presentation by Larry Dalton delivered July 21, 2008. The steaming version of the persentation is available here.

One of the things that we all face as scientists is deciding what topics we want to pursue for our research career. Two things are useful. One is the professional society which hold special symposia on hot topics such as high temperature super conductivity. An ever better avenue is the workshops that funding agencies hold on emerging topics. In 2007 both the NSF and the Defense Science Board, which make recommendations for defense spending, held workshops on photonics integration. So this is perceived as a hot research topic.

Trends for Data in Telecommunications 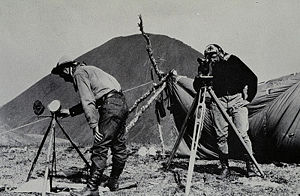 The history of modern telecommunication by wire and wireless dates back to the telephone, which transduces the phonon vibrations of the human voice into electrical signals that are carried over copper wire. Wireless telecommunication date back to the heliograph, which uses mechancial modulation of light. These original devices had very limited bandwidth because a shutter can only run so fast. Copper wire was ok for the amount of data that a voice stream demands. Telecommunications has evolved to support "machine-to-machine" telecommunications. This has placed dramatically larger demands on bandwidth– the amount of information sent per unit time. We also want more capability in smaller and smaller devices. Copper has given away to optical fiber. Wireless frequencies has extended to 100 gigahertz carriers, eg gGigabeam inc. You only have to look at the advertisements for bandwidth and integration for consumer devices to release how important these have become as drivers.

Moore’s Law- the History of Integration 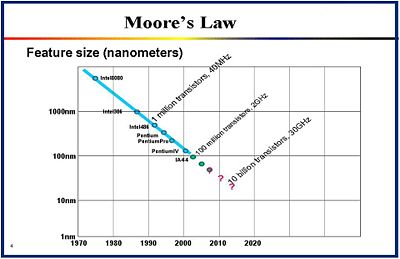 The size of features has been decreasing.

Nano-engineering has been around for a long time. For example, silicon CMOS technology has built smaller and smaller transistors and placed more transistors on a chip. Moore’s law shows feature size decreasing over the years and has allowed us to place 10 billion transistors on a chip in 2010 with a bandwidth of 30 GHz. This has resulted in a great reduction in cost. You can buy a computer today for about the same cost as 30 years ago but the functionality has exponentially increased. Tools such as reactive ion etching (RIE) and e-beam lithography have enabled nano-engineering.

File:700px-Moore Law diagram (2004).png
The number of transistors on a chip are steadily increasing.

We take for granted the dramatic impact that these changes have had on how we live. Information technology is one of the three largest component (energy and agriculture are the other two ) and is the fastest growing component of the world economy. One third to one half of the world’s population will be employed in information technology by the year 2010. It will have a greater impact in the next 20 years because of electronic/photonic integration and nano-engineered materials.

Moore’s law talks specifically about electronic device integration. But photonics play a major role about everything we know about the universe, for example your eyes are photodetectors. There is now both top-down nano-engineering with electronic integration but also “bottom up engineering”– starting with molecules and building up to structures. 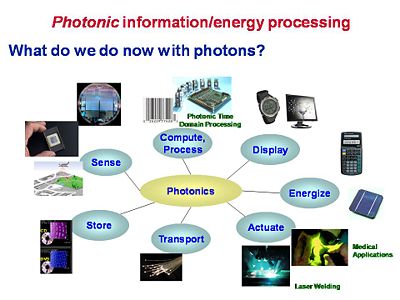 Photons are important. They can be used to; 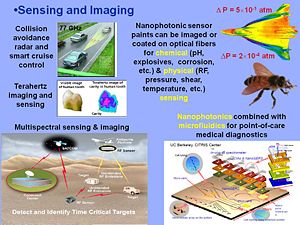 Sensor technology has been evolving at a collosal rate so we have deal with more and more data. Now we can use sensor paints that let us monitor pressure. An airplane in a wind tunnel is covered with pressure sensitive paint and reveals using color the instantaneous pressure on the surface. Biocompatible paints could be applied to a honeybees wing to study its performance during flight. Nanophotonics sensors can be combined with microfluidics allow for point-of-care diagnostic chips, for real time diagnosis of any chemical. Collision avoidance radar can be integrated with automatic cruise control on vehicles. Terahertz imaging can see inside normally opaque materials with low energy radiation. All this leads to flood of information.

In the universe there are four types of particles involved in the communication of information.

Electrons—Negatively charged particles and the lightest of the three particles (electrons, protons, and neutrons) that make up atoms. The electron is most easily perturbed by the application of an electric field. If you take an single atom the energy levels are quantized. The highest occupied orbital is bound state so electrons are localized. But in metals, electrons in the highest occupied band conists of electrons that are not tightly bound to any specific atom known as the conduction band. That movement can be used to convey information.

Phonons—These are quantized vibrations or quantized sound waves; however these are short ranged so we will ignore them. We have to convert phonons into electrical or optical signals in order to convey them over distance.

Plasmons—These are quantized waves in metals excited by light. These are short ranged so we will ignore. They are useful for engineering extremely small scale circuits connected by nanowires carrying plasmons.

What is the best information carrier, electrons or photons? 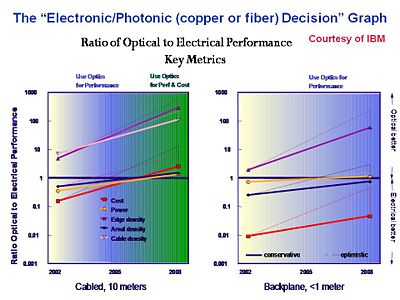 Electrons are fermions. They are strongly interacting with matter. They can be sent down a copper wire. Conduction electrons are equally well positioned by any metal atom along the wire once we apply an electric field as a driving force to send them in a direction. However they scatter off nuclei and with increased temperature the vibrational energy of nuclei increases so the scattering becomes worse; the resistivity to the electrons moving down a wire increases with temperature. Electrons also interact strongly with each other, so it very difficult to propagate electrons over long distances through metal wire.

Photons are bosons. They are weakly interacting particles. They have nearly unlimited bandwidth. The transmission through optical fiber has very low loss so we can send signals around the world by fiber. When you want bandwidth and to transport over “large” distances, use photons; when other factors such as computing are important use electrons.

Companies like Intel and IBM use decision graphs to help to determine when to process information using photons as opposed to electrons. The graphs compare optical to electrical performance as a function of time, for a variety of parameter such as cost, power and information density. Starting in 2006 photonics was preferred to send information farther than 10 meters. In 2008 photonics is indicated for all applications except for a cost factor even over short distances. This has led to determined efforts by Intel and IBM to integrate photonic technology directly on electronic chips.

What are the economic drivers for chipscale electronic/photonic integration? Computing – Connecting chip-to-chip and within a chip (chipscale)

What the technology drivers of integration? SWAP - Engineers worry about SWAP(Size, Weight, and Power). All can be decreased using photonics integration. 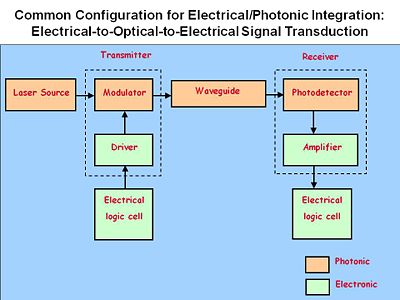 On the same chip there must be instantaneous, seamless interconversion of electrical and optical signals. This entails two fundamental operations; 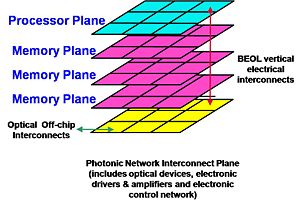 Integration requires a series of science and technology advances before a product can be made that people will spend money on, e.g. the MP3 player. Since 2000 all the major journals in EE have been covering photonics integration. Many federal funding agencies are trying to move this vision forward.

Type 1 integration is already here. Type one refers to simply taking the photonic devices such as lasers, modulators and optical circuitry and attaching it by conventional means like wires and fibers to electronic technology. You can replace 10 electrical coaxial cables with one optical fiber. Many of our older military aircraft are being retrofitted to remove electrical wire. This saves weight and size, reduces power consumption, and limits vulnerability to electromagnetic interference. The same thing is happening in the computer industry. The IBM Federation Switch for ASCI Purple has converted coaxial copper cables (issues: bulk, bend, weight, blockage of air cooling) to optical (issue: cost).

Type 2 is the future. Photonic and electronic function is on the same multi-layer chip. The chip has a processor plane over memory planes, on top of a photonic network interconnect plane that includes optical devices, electronic drivers and amplifiers and electronic control network.

We are envisioning a Smart Card

On a larger scale many of these devices are connected to each other through a community optical network. To integrate all the possible components we need to be able to seamlessly convert back and forth between optical and electrical signal domains.