Over the past several decades, photonics has steadily increased in importance as the preferred medium for data communications. With increased demand for higher bandwidth and more energy-efficient data transfer, optical fibers soon will replace copper wire even for simple tasks such as communications between computers and their displays as well as communications between nodes within supercomputers and microprocessors within server farms. Within such systems, optical signal processing and switching technologies have performed the relatively simple tasks of signal multiplexing, demultiplexing, amplification, routing and dispersion control. More complex tasks are typically performed electronically after optical to electrical conversion and subsequent electrical to optical conversion procedures. 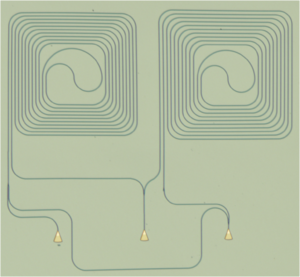 The relative length of each resonator ring can be used to select particular wavelengths.

Within the past several years, lithographically defined electronic and photonic circuits have been integrated into systems that enable complex functionality. Now, it is possible to contemplate including photonic logic and storage into such circuits. In particular, such integration could lead to the opportunity of reducing the overall energy requirements of computer systems. 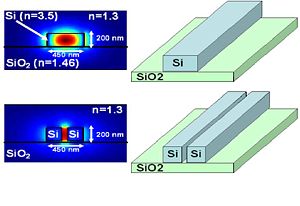 A silicon on insulator waveguide carries the light within the guide. In a slotted guide the light is concentrated between the silicon guides.

The development of waveguides with high refractive index contrast enables the confinement of light within the small mode volume of such waveguides. Miniaturization of resonators, waveguide bends, and other optical devices has resulted from creating device geometries with high refractive index contrast in easily manufacturable materials systems such as silicon on insulator (SOI).

More recently, narrow slots have been introduced into high index contrast waveguides in order to permit the introduction of gain or nonlinear material into passive devices. Surprisingly, a large fraction of the optical field can be confined within such slots in waveguides. If these slotted waveguides are constructed in a material such as silicon, which conducts and is transparent to the propagating wavelength, EO devices can be created by introducing nonlinear materials into these slots.

One remarkable property of these microfabricated Si/polymer EO modulators is that their drive current can be sub-nano-Ampere, dominated by leakage currents which are low as the polymers are excellent insulators.

All optical on chip 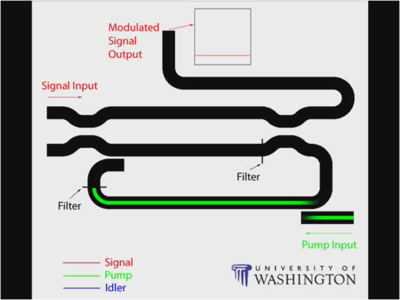 An all optical system needs to be able to use light to pump signal gain or else the system has to go back into electrical form. 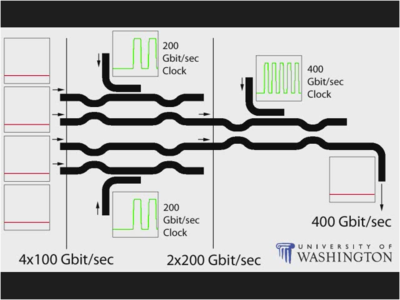 Light can be used to change a light signal.