In a conventional silicon solar cell two layers of silicon are doped so that one is electron rich (N layer) while one is electron poor (p or hole layer). When photons are absorbed near the junction the electron and holes separated and the electrons flow away from the cell towards the load. Finally the electron return through the circuit and recombine with the holes. <swf width="500" height="400">images/0/0c/Solarcell.swf</swf> 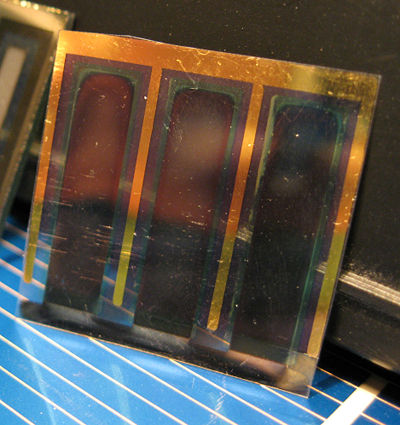 An organic solar cell is an electricity-generating device comprised of thin layers of conductors, and photoelectrically active organic compounds. This section is based on lectures presented by Professor Jean Luc Bredas at Georgia Tech in 2007, and by materials contributed from several other technical sources, including Department of Energy workshops on Solar Electric energy conversion. We will look at the major processes in solar cells and overview of the organic solar solar cell.

In organic solar cells light passes through the glass cover coated with transparent Indium Tin Oxide (ITO) and a PEDOT/PSS transport layer. A bulk heterojunction is made with polythiophene and a C60 Fullerene derivative P3HT- PCBM and finally a bottom electrode made from aluminum. In the heterojunction photons are absorbed and charge is separated creating an electric current.

There are serious issues inherent with the energy needs of this country. Even during slow economic growth we continue to use an ever-increasing amount of energy, and our energy consumption world-wide is projected to more than double by the middle of this century. Organic photovoltaic devices are an important emerging technology, part of a broad spectrum of "Generation III" photovoltaics, which promise to provide solar-to-electric energy conversion in portable, light-weight packages, at extremely low cost.