Although solar energy is a very small component of the overall sources of energy, its use is growing significantly. An exponential increase in the production capacity of solar energy is still needed in order to satisfy the energy needs of today.

This map shows the average irradiance of the US.[1] 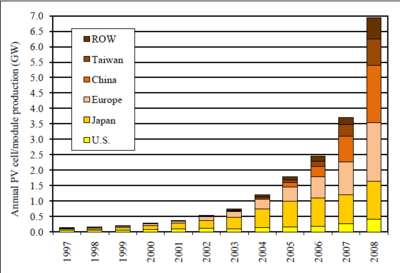 The U.S. lags other countries in PV shipments.[2]

A 42% annual growth rate of cumulative installed PV capacity has been fairly steady in recent years and been accompanied by a steady decrease in the price of solar modules (per watt), from nearly $100 in 1976 down to an average of $4. In 2005, for the first time in history, a total of over 1 Gigawatt (GW) of power capacity was added, increasing the cumulative installed capacity to a value of 3.7 GW in established industrial countries. The greatest proportion (85%) was provided by Germany and Japan alone.

"Generation I" (single crystal and poly-crystal silicon) solar cells may be found on roof tops, and in large power generating arrays around the world. The balance of system (BOS) cost is generally larger for off-grid applications because they require a storage device, such as an array of lead-acid batteries. For on-grid houses or industries, solar-generated electricity can be distributed back into the electrical grid when production exceeds the needs of the user.

Organic solar cells (organic photovoltaics or OPVs) are an emerging Generation III technology, providing another lightweight option for off-grid applications (e.g. chargers for portable electronics). OPVs may eventually compete for power generation with Generation I on-grid devices if their efficiencies and lifetimes are high enough, and their costs low enough. 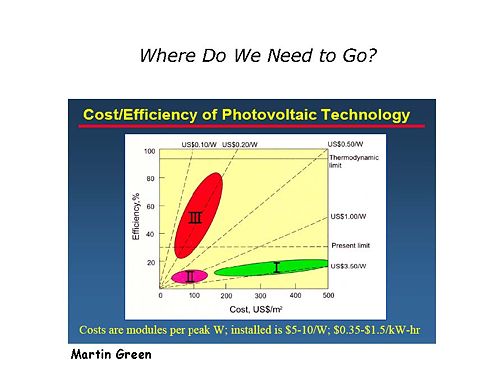 Graph of efficiency vs. cost for generations of solar cells. Courtesy of Martin Green

Silicon solar panels on a roof

Solar cells currently on the market are almost all Generation I devices made from crystalline silicon, considered to be a "mature" technology. They are somewhat expensive to produce because of the high processing costs needed to create silicon cells with sufficient purity and long range-order. See Types of Solar Cells

Generation II materials are less mature as a PV technology, and are generally created using vacuum deposition or chemical vapor deposition (CVD). These include CdTe or copper-indium-gallium-selenide (CIGS) technologies. Their costs are lower, as are their efficiencies, but they are thinner and lighter than silicon cells. Disposal at end-of-life is a consideration, because of the toxicity of Cd, Te, Ga, and Se, and because of concerns regarding their earth abundance.

OPVs come in several different platforms, and when fully optimized, will be light-weight, low-cost, flexible and easily scalable energy conversion platforms. Their mode of energy conversion is based upon formation of a heterojunction between a donor (D) and an acceptor (A) material, which can be two different organic dyes, a polymer and a small molecule, a polymer and an ensemble of semiconductor or oxide nanoparticles, and a host of variations on this theme. 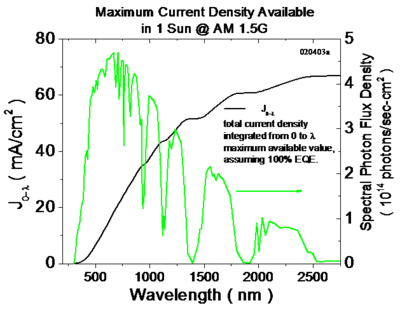 Solar spectral distribution for one sun.

A broad-band light source is often used to illuminate OPVs under test, sometimes filtered to approximate the output of the sun at the earth's surface (air mass (AM) 1.5 = Air Mass, corresponding to an incident power of 100 mW/cm2 or 1000 W/m).

This green curve shows solar spectral distribution for one sun (the y-axis units on the right) for standardized conditions. The dips in the bands represent absorption by carbon dioxide and water in the atmosphere. These dips also account for reflectance back towards Earth, e.g. the greenhouse effect.

The black curve (y-axis on the left) represents the total current density you could produce in a photovoltaic device, performing the integration up to a certain wavelength. The maximum current density can be calculated by counting all the photons starting from 0 wavelength on the high energy side. This is the maximum current density that can be obtained if the power efficiency were to be 100%, i.e. if for every photon that enters, one electron also enters the electrical circuit. This represents a photocurrent of 40 milliamps per square centimeter of solar cell area. No known solar cells have achieved such current densities without concentrating the sun's power on the solar cell. Established efficiencies (NREL certified) for OPVs to date are, at best, just under 6%. 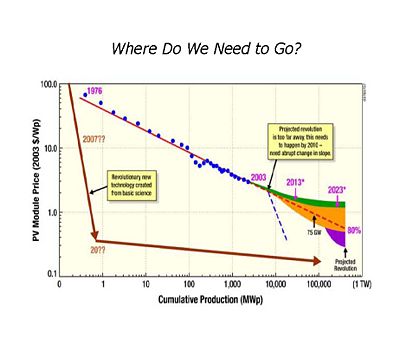 This DOE graph shows price vs. volume of PV production. The brown line shows what the curve might look like with a disruptive new technology such as OPVs.

The major driver for the adoption of new technologies is often a combination of a lack of supply of the old technology (e.g. fossil fuels), and the introduction of a "disruptive" new technology. The increased cost of electricity generation from fossil fuels, coupled with climate change issues associated with their use, are driving the search for new forms of energy. The cost of electricity from coal-fired thermal plants is about 4 cents per kilowatt hour, whereas silicon PVs create electricity at about 25- 35 cents per watt (that price continues to fall). The price for alternative solutions such as solar cells is still too high. For instance, Nobel Laureate Professor Alan Heeger[4] has installed a solar cell roof on his house in Santa Barbara, California. It will take 7-8 years before he is able to recover his initial investment. However, that is still better than paying electricity costs every year for the lifetime of the PV devices.

The most important metric is the power conversion efficiency of single cell. With respect to the given input power of the sun, what is the electrical output power that the solar cell can produce?

Calculate the Carbon footprint to charge an iPod

Use this simulation to get a feel for how OPVs could become competitive if the efficiency comes up and the cost comes down. 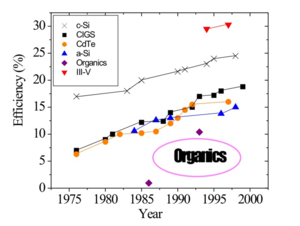 Both small molecule and polymer-based OPVs have recently shown dramatic improvements in efficiency, approaching 6%. Dye-sensitized solar cells (DSSCs) are hybrids of nano-porous metal oxides, like titanium oxide, and organic dyes, with solution electrolytes. DSSCs can demonstrate power conversion efficiencies of 11-12%, however they have proven difficult to manufacture in stable platforms. Ccurrent research is focused on using condensed phase, polymeric charge transport agents, and it would not be surprising if OPVs and DSSCs converge on very similar material combinations and device platforms.

Five percent is considered a reliable efficiency for OPVs at this time. This low efficiency is tolerable if the production expense is small compared to silicon devices. OPVs are projected to become economically viable at 10-11% efficiency. 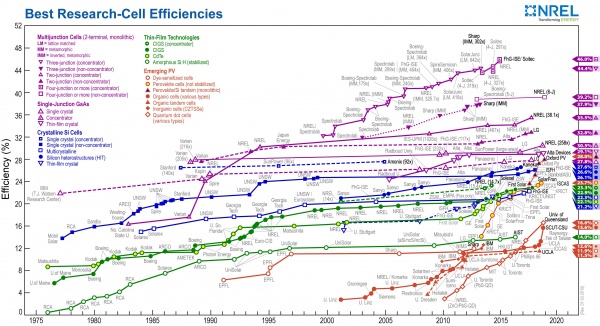 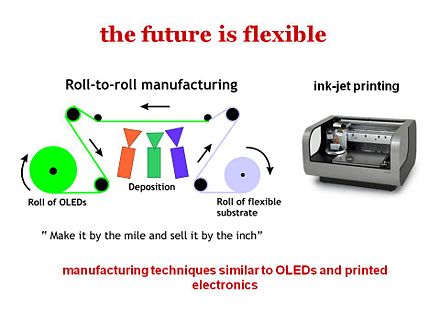 OPVs are also attractive because of their potential flexibility and light weight. Many off-grid applications in remote areas of the world would be greatly aided by portable power. It would enable you to take your iPod on that next backpacking trip, or disseminate remote sensors throughout the food system, powering sensors that can detect pathogens in real time.

Organic solar cells may eventually be manufactured with easily processed plastic substrates, using standard printing and screen printing techniques rather than the elaborate methods required with silicon solar cells. At end-of-life they promise to be easily recycled or disposed of.

Flash explanation of electrons and holes in solar cell