Energy vs Charge Transfer at Heterojunctions

The picture that was given earlier, where the exciton comes to the interface and the electron transfers from the donor to the acceptor, is very simplified. In reality, the process can get much more complicated. That is the reason why the disassociation is not, in most cases, fully understood. Efficient charge transfer is key to improving the energy efficiency of OPVs.

For oligomer/polymer – fullerene heterojunctions photo-induced charge separation is usually assumed to proceed via the formation of a localized excited state on the conjugated oligomer or polymer followed by electron transfer from polymer or oligomer to fullerene. This is consistent with C60 having a very small optical absorption in the visible because of symmetry-forbidden transitions. 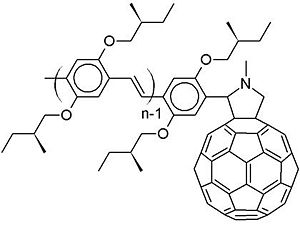 This molecule is the type of molecules that Rene Janssen and his group at Eindhoven University of Technology in the Netherlands have synthesized and factorized. They excited an oligophenylenevinylene segment and there is an exciton within that segment. Instead of having an electron transfer from the excitonic state on the donor to the acceptor, what happened first is an energy transfer to the fullerene.

Photogenerated currents and Voc for polymer:fullerene bulk heterojunctions are at variance with classical P-n semiconductor models. [4] 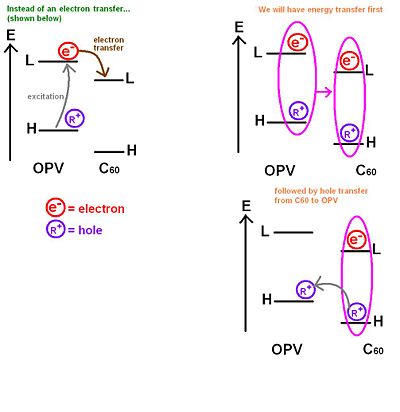 If we take a very simple picture with an energy diagram with levels of the C60 and oligophenylenevynylene moieties. Usually, there would be an excitation to the LUMO and the leaving a hole on the HOMO followed by an electron transfer from the OPV to the C60. However, Janssen has shown experimentally that in several dyad systems the entire exciton jumps onto the C60. This is an energy transfer. After the exciton jumps onto the C60 , it becomes favorable for the hole to jump back to the OPV HOMO. In other words, instead of having a direct electron transfer, there is an energy transfer from the OPV to the c60 followed by a hole transfer from the C60 to the OPV. The end picture is the same as the one you would expect if the process only included a simple electron transfer(as previously expected) because the hole would be at the HOMO in the OPV and the electron would be at the LUMO on the C60. However, the rate that describes the energy transfer step plus the hole transfer step could be totally different from the rate corresponding to the direct electron transfer step.

The end state is the same, but whether it is reached it more or less efficiently is an open question. So this provides another path for the charge separation, which could be more or less efficient. But the direct path or direct electron transfer might take too long and fail to work. This is an example of how these processes can indeed be more complex.

Energy transfer occurring first, which could happen at long range, can be useful in terms of making the excitons willing to go the interface. In other words, it gives a drift to the excitons instead of a diffusion motion. This is a topic Mike McGehee at Stanford is studying.[5]

The pole - dipole model that one usually uses to describe energy transfer doesn’t work in this case; you need to go way beyond that simple model. For that system, the calculations indicate that the resonant energy transfer from the OPV segment to the fullerene can occur on a sub-picosecond time scale and thus, it can be extremely fast. 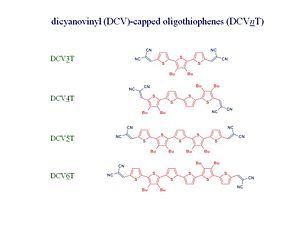 The oligo-dicyano-thiophene – C60 blends have C60 with a partner that is not an OPV but an oligothiophine have been synthesized by the group of Peter Bäuerle at University of Ulm in Germany and characterized by the group of Karl Leo in Dresden. Karl Leo has been the forefront of research, especially in the case of light emitting diodes.

The oligothiophenes are derivatives that have 3, 4, 5, or 6 thiophene rings that are endcapped by dicyanovinyl groups. The NC and CN ends provide a rather good acceptors however the electron affinity of the oligothiophenes is still less than the electron affinity of C60. Therefore, when two of them are together, C60 will be still be the acceptor component.

Upon illumination of a material singlet excitons, triplet excitons, as well as charges and can be formed. The absorptions of the species that have been produced through illumination can be followed spectroscopically. This is referred to as looking at the photon induced absorption. This process starts with the illumination upon the system. Then the results are compared based on how absorption has been changed due to the system being put into an excited or ionized state. Calculations have been able to provide a very fine description of the types of species found in the photo-induced absorption spectra. Photoinduced absorption means that there is a pump beam that puts the material in the excited state and there is a probe beam that looks at what is the absorption or transmission. 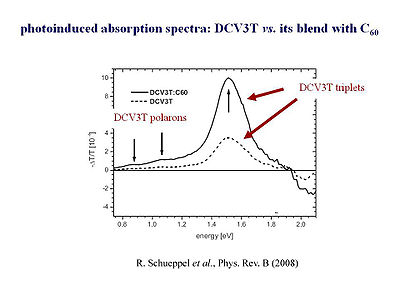 T represents transmission, which is the variation in transmission upon illumination compared to the transmission in the dark. The lower line is the normal transmission; light is shined on the system and observations are made based on where it absorbs or transmits.

Rico Schüppel [6]and his group in Catalunya have look at the photoinduced absorption in those oligomers. First, he looked at the film of the oligothiophene oligomer alone. Based on what we have learned before, films of the pure oligomers should generate very few charges. In oligothiphenes small intersystem crossing will create a few triplets. Therefore, in the a homogenous film of the three thiophene ring oligomer (oligothiophene), very few charges, polarons, and a few triplets are generated. Something surprising happens when they make a blend of the oligothiophene with C60. You would expect the C60 to grab the electrons from the photoexcited oligothiophene, and thus, see many more charges. In other words, referring to the graph on the slide, you would expect to have a very large increase in the segment corresponding to the formation of polarons and hardly any triplets. However, what they find is that there is indeed a few more charges that are generated but actually, you get many, many more triplets.

In summary, you have a singlet energy transfer from the oligothiophene to the C60. Within C60, the intersystem crossing to the triplet occurs, following a back energy transfer from the triplet to the oligothiophene. This whole process is referred to as a ping pong mechanism or ping pong effect. So as you can see, things can become pretty complex when dealing with a hole transfer instead of electron transfer.