These are the types of efficiencies that people have been able to reach. For example, with silicon, fill factors of about 0.8 and conversion efficiency, of 24% can be reached.

The Grätzel cell, which is a hybrid cell that has both organic and inorganic components and uses a liquid electrolyte, has a conversion efficiency of about 11%. Michael Grätzel is a professor at the technical school of Lausanne in Switzerland.

With polymers, Allen Heeger has recently reported a conversion efficiency of up to 6%. Our goal at this time is to reach the 10% efficiency in organic cells. However, it does not seem to be very easy to achieve. 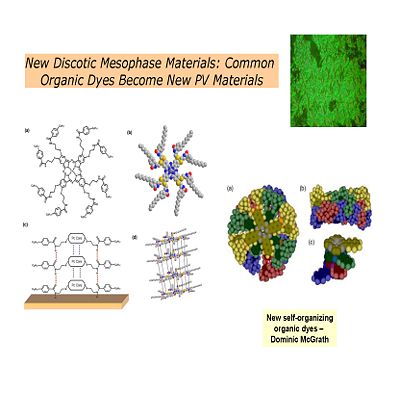 Another kind of thalocyanine that is solution processable form molecules that self-organize into columnar stacks. This the kind of configuration that makes molecules good light absorbers and good conductors. 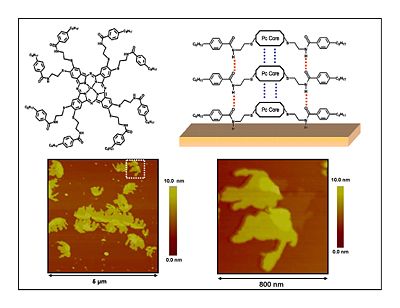 An AFM visualization of sheets discotic materials that have been deposited on a single crystal substrate. 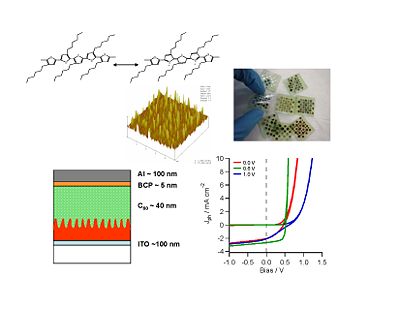 Dendritic polymers create a spiky surface which may be able to be combined with an suitable electron acceptor layer to form a finely organized heterojunction.

There is research into using quantum dots to expand OPV absorption from visible to include IR spectrum making them efficient on cloudy days. PbS is one material of interest. [1] 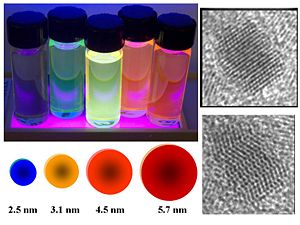 Quantum dot compounds can be can be used as part of the donor or acceptor materials.

Semiconductor nanoparticles built from cadmium selenide 2-5nm in diameter take on interesting electron properties. The particle is capped with ligands to make them processable. The size of the nanoparticle determines the luminescence. The smallest make blue color, the largest makes the red. Used in a solar cell they absorb in the same color ranges.

Doped carbon nanotube (CNT) electrodes can be used to create transparent electrodes which have low sheet resistance and a favorable shift of fermi level. 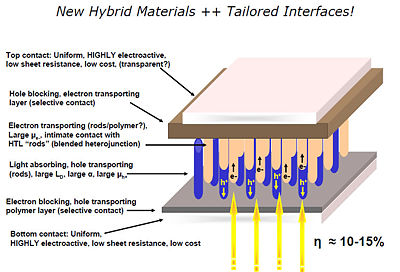 New hybrid materials could be used to build a solar cell step by step. Light absorbing rods are placed on a transparent base. Then the electron transport rods, and the hole blocking layer.

There are real advantages to processing methods which could easily, reproducibly and systematically nano-texture the first-deposited donor or acceptor polymer layer in an organic solar cell (OSC), forming “nano-posts” or “nano-indentations” with optimal lengths and widths, ready for addition of the second component in a bulk heterojunction (BHJ) OSC. As the aspect ratio of such a nanostructure increases, at least an order of magnitude increase in the interfacial area between the donor and acceptor phases is anticipated, thereby greatly enhancing exciton dissociation with retention of vectoral charge transport pathways. Such a processing technique, if scaled to realistic device levels, would remove one of the key limitations to BHJ formation from conventional polymeric materials. Nanoimprint lithography (NIL) involves the formation of nano-posts or nanoindentations in a reusable master stamp, which is then used to emboss a freshly deposited polymer or sol-gel oxide film. This is a process recently developed for creation of grating-like features on optical fibers and waveguides, and is now being scaled to dimensions relevant for OSC device processing.

One of the reasons that OPVs are only 5% efficient is the exciton diffusion bottleneck due to recombination of the exciton within 10nm of the interface. Unfortunately making a blended device with an ideal morphology has been difficult.

There are new strategies for producing titanyl phthalocyanine (TiOPc) and C60 heterojunctions. After deposition the material can be solvent annealed resulting in nanotexturing and tunability in the NIR. 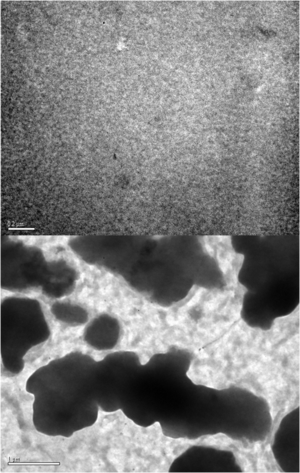 Annealing of a blended polymer film causes a partial phase segregation into distinct islands. If a material is applied without annealing there is almost no performance because the exciton has no clear path for exciton moving. Yet the larger islands of material means a smaller interfacial area decrease the charge dissociation which again decreases the performance. 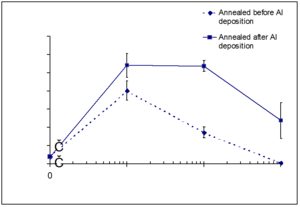 Luscumbe has shown that it is critical to balance these competing requirements by controlling annealing time.

One barrier to increasing the size of organic solar cells is the reduction of fill factor caused by sheet resistance of the ITO layer.

Applying metal electrode grids can be employed to counter the effect of sheet resistance.[9]