Degrees of Order in Liquid Crystals

In general, based on the enthalpy of the transitions, it is concluded that LCs are more liquid-like since the greatest enthalpy of transition occurs upon going from the crystal to the first LC phase. You tend lose most of the order going from crystalline or liquid crystal state.

For a given material it is possible for there to be several discrete LC phases.

As a function of temperature, it is therefore possible to see several transitions with increasing temperature upon a transition the newly created phase has increased disorder.

The director is average direction of the long molecular axes of all molecules in the liquid crystal. Individual molecules may be more or less aligned with this vector.

Rod like liquid crystals are generally oriented with their moments of inertia roughly aligned along an axis that is called the director.

The smaller the average angle of displacement of the moment of inertia from the director, the more ordered the liquid crystal is. The order parameter is given by

is the angle between any molecule and the average director

When θ is zero there is a very high degree of organization order. For most liquid crystals the orientational order parameter varies between .3 (not very ordered) and .9 (very ordered).

Thus, when θ is 0° for all the molecules, the orientation parameter is one, which is the case for a crystal in the space group P1 for example. When θ is 57° the orientational order is by this definition 0.

Order as a function of Temperature 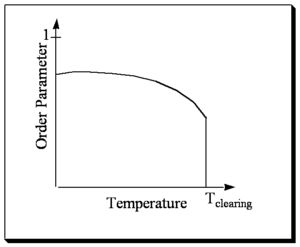 The orientational order decreases with increasing temperature and then goes to zero (isotropic) at the clearing temperature (the temperature for the transition to an isotropic phase). At higher temperatures the molecules have more thermal energy and they can sample more angles of space.

Positional order is the degree to which the position of an average molecule or groups of molecules exhibit translational symmetry. 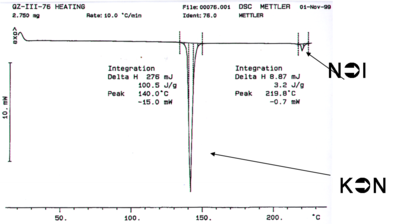 A DSC graph shows heat flow during phase changes. A dip indicates an endothermic process such as melting. A flat line indicates a linear heating curve.

This liquid crystal was made in the Marder lab. The differential scanning calorimetry (DSC) measures the amount of the amount of energy that must be added to a sample to change the temperature 1 degree C. Differential scanning calorimetry can be used to characterize the temperature at which phase transitions occur, as can optical microscopy. If a system has an enthalpy change there can be an absorption of energy without a change in temperature. For example when water goes from ice to liquid state a lot of energy is added without a change in temperature. This is expressed in the DSC in the form of a heat flow without temperature change. If you know the precise amount of material and then calculate the area under the curve you can calculate the heat delivered and therefore the enthalpy of a transition.