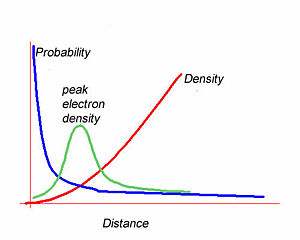 Electron Probability, peak density and electron density as a function of distance from the nucleus.

Orbitals are important because they determine the distribution of electrons in molecules, which in turn determines the electronic and optical properties of materials. Atomic orbitals are wave functions that are solutions to the Schrödinger equation. This equation allows us to figure out the wave functions and associated energies in atomic orbitals.

The square of the wave function gives the probability of finding an electron at a certain point.

Approximate shape of atomic orbitals viewed as a surface. 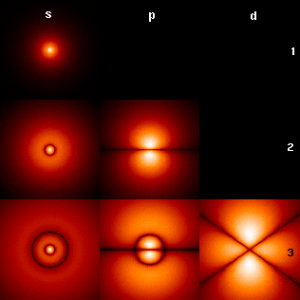 Visualization of electron density as cross sections for orbitals and shells.

The p orbitals have orientations along the x, y and z axes. A node is a place where there is zero probability of finding an electron. A radial node has a spherical surface with zero probability. P orbitals have an angular node along axes. We usually indicate the sign of the wave function in drawings by shading the orbital as black and white, or blue and green.

Core electrons are very tightly bound tot he nucleus and spend most of their time very close to the nucleus. They are largely unaffected by the presence of nearby atoms.

Valence electrons are less tightly bound to the nucleus and are in the outermost "shell". These electrons are easily affected by the presence of other atoms and the ones that are critical for bonding between atoms.

According to the Aufbau principle we start adding electrons to the 2s orbital and then to the three 2p orbitals, each of which can have up to two electrons. The orbitals are filled from lowest energy to the highest. Here are the electron configuration for row two of the periodic table. The 1s orbitals are core while the two 2s and 2p orbitals are valence electrons. Neon has a full octet so it is non-reactive, ie a noble gas.

Here is the general rules for filling orbitals.

In working in an interdisciplinary research its easy to get confused with different terms for the same concepts as used by physicists and organic chemists. This table might help: