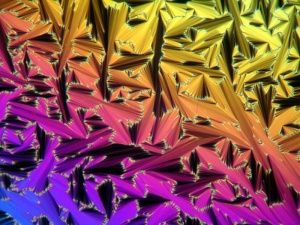 When viewed under a microscope with crossed polarizers, one of the most striking features of liquid crystals is the appearance of texture. Normally no light will pass through cross polarized filters because first one and the other polarized waves will be cut out.

An isotropic material placed between crossed polarizers will allow no light to pass through the polarizer.

If a birefringent material is viewed between cross polarizers and the optical axis is aligned with the polarizer it will not pass light. But if the optic axis not perfectly aligned along one of the axes of the polarized light will be transmitted.

Textures occur which appear as sudden change in the image, going from light to dark. In such a case there is a discontinuity in the direction of the director. Such a defect in the order is called a disclination. When one domain of aligned directors transitions to another domain with different alignment there is a sudden change in light and dark patterns. This texture from a corodene molecule is indicative of a certain kind of liquid crystalline phase.

Liquid crystals can be used to make displays because of certain properties. Liquid crystals are birefringent so depending on the orientation of optical axis of the system cross polarizer can pass or block light. Displays must have an “on” and “off” state. Liquid crystals have cohesive interactions and they have electrical properties that allow them to respond to an applied electric field. A screen has a front and back surface with liquid crystals between.

In principle, the director can be oriented at an angle with respect to a substrate.

The alignment of the liquid crystal is very sensitive to the polarization and polarizability of the surface in which it is in contact. 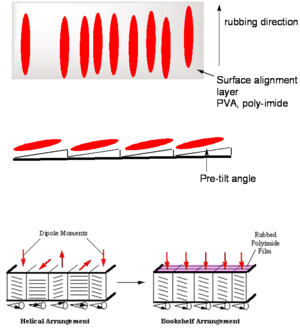 Surface treatments encourage molecules to align in a desired orientation

It is therefore possible to judiciously modify the surface in such a manner as to control the orientation; this is called a surface alignment layer or a surface stabilized ferroelectric.

This is in part art, in part science, and in part engineering.

It has been found that if a very thin layer of a polyimide is placed onto the substrate surface and then rubbed in one direction only (not back and forth), that it is possible to favor a homogenous alignment of nematic phases. Depending on the details of the molecular surface there will be some angle between the director and the surface referred to as the pretilt angle. In the diagram the director is shown in its cone as a layered structure. The dipole moment is typically perpendicular to the director. As the director goes around the cone it is possible to change the dipole moment by 180 degrees. If there is a dipolar interaction at the surface you can unwind the molecules so their directors aligns, the dipole moment aligns, resulting a net polarization of the entire phase.

If the surface is treated with a long chain lecithin or long chain trichlorosilanes it is possible to favor a homeotropic alignment.