America’s electrical grid has been heralded as one of the greatest engineering achievements of the 20th century, enabling customers hundreds of miles away from power plants to be instantaneously supplied with power. However, the technology that underpins it is aging and rapidly becoming inadequate to deal with the increasing demand for electricity and the rapid modernization of our society.

The electrical grid is a large and complex system with multiple interdependent parts. If a part further up the chain fails, it can leave large areas affected.

During the early days of the electrical age, electricity was provided from power plants via a plethora of local grids. These power plants were generally located both close to customers and to their fuel sources. Power was delivered to customers over short distances and at low voltages. Although this system worked well enough initially, it was not scalable as more and more people began to clamor for electrical power. As a result, these smaller grids grew, and a more complex system, involving steps up and down in voltage to facilitate transmission, was created. In the 1920s, utility companies took steps to interconnect these grids in order to improve reliability, creating the ‘grid’ we know today. (The United States actually has three electrical grids: the Eastern Interconnect, the Western Interconnect, and the Texas Interconnect, which are connected only in a few places). During the depression, there was a large push for governmental intervention in utility affairs, resulting in federal and local regulation. Up until the 1980s, utility companies were usually vertical monopolies, controlling the generation, transmission and distribution of electrical power. Relatively recently, regulators have opened up windows for non-utility generation, or distributed generation, thereby facilitating the integration of renewables like wind and solar. Another recent push has been to establish competitive wholesale electricity markets. Although in some places in the United States, such as Texas, this proposition has been relatively successful, it has been slow to catch on in many other places.

What are the problems with our current system?

The current electrical grid has little to no capacity for electricity storage, so any power that is generated must be instantly consumed. If supply does not match demand, the frequency of the AC voltage can change. If it falls outside of a certain range, it can cause the failure of electrical equipment or even parts of the grid itself. The electrical grid is based on a supply-follows-demand system, meaning that consumers essentially determine how much electricity will be used, and the suppliers need to adjust their outputs to match it accordingly. Economic incentives, like electricity rates, are usually only effective on a month-by-month basis, and thus have little effect in controlling short-term fluctuations in demand. It therefore falls to the power plants to vary their output to keep pace exactly with demand increases and shortfalls. This requires careful planning on the part of utility companies, who need to estimate power consumption very accurately on the basis of historical trends and weather reports. However, getting the right amount of electricity out of a power plant is not just as simple (or complicated) as predicting demand. Nuclear and coal-fired power plants are good at producing large amounts of electricity, but it can often take hours to start a plant back up after shutdown. In addition, they are slow to adjust their output, and are often designed in a way that efficiency is compromised if the plant’s output falls outside of normal operating margins. As such, other kinds of power plants need to be able to make up for fluctuations in demand. Weather-dependent renewables, like wind and solar, are also subject to fluctuations based on local conditions, which can destabilize the situation even further. This instability is a significant obstacle to the widespread adoption of these sources of renewable energy in the U.S. When there is an excess of power on the grid, it often falls to other clean technologies like hydro power to cut back on their output, which is less desirable and leads to a greater carbon footprint.

A satellite image of the United States during the 2003 northeastern blackout, which left 55 million people in New England and Ontario. The interdependence of the grid can make it easier to manage local problems, but can also cause chain reactions that can affect large areas.

Another persistent problem for utilities is weather. Weather can cause short-term fluctuations in demand (a hot day would see an increase in air conditioning, while a snowstorm might result in an increase in heating), but can also cause damage to the electrical system itself. Most power outages are caused by tree limbs falling on sensitive equipment like power lines and transformers. This is usually a local problem, but can result in excess voltages for nearby systems if power levels are not adjusted to compensate. This can in turn cause them to fail, which endangers further nearby units. A cascading failure of this type was responsible for a record blackout in the northeast U.S. in 2003, where an estimated 55 million people lost power. In this case, a software glitch made it so that utility companies were unaware of the outage; however, in some cases, utilities can remain unaware of outages until they receive telephone reports from customers.

What approaches are currently used to deal with these issues?

During periods of peak demand, there are a number of strategies that utility companies use to keep up. Although there is no capacity for storage on the grid, energy companies can sometimes send excess energy to storage facilities, which can be tapped into later during times of need. Most of these are ‘pumped-hydro’ plants, which operate by pumping water uphill and storing the potential energy. Other methods include compressed air, thermal storage or even batteries. None of these methods are very efficient or cost-effective, however. The most common strategy is to fire up so-called ‘peaker plants,’ which are gas fired plants that can be quickly turned on and off so as to only operate during periods of peak demand. These plants tend to be older, less efficient plants that are expensive to maintain. If the peaker plants cannot generate enough electricity to keep pace with demand, utility companies often have options to pay large, industrial consumers to reduce their consumption temporarily until demand stabilizes, or importing electricity from their neighbors. Finally, to prevent a large failure, utilities can order ‘rolling blackouts,’ where parts of the grid lose power entirely for a period of time. The electric utilities will try to ensure that these blackouts are distributed relatively evenly for a period of time. 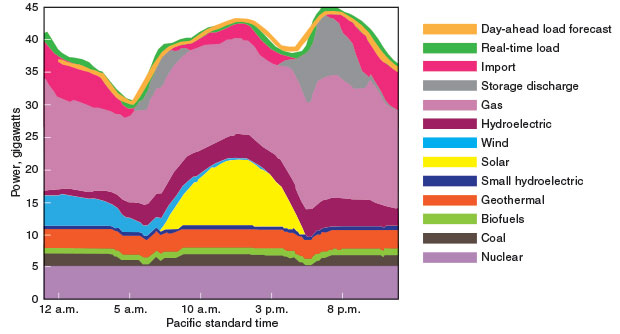 A hypothetical day of power consumption in southern California. The variability of renewables like wind and solar can strongly affect total generation, and imports and storage discharge can be very important to make up for lost demand.