π-conjugated organic molecules have delocalized electrons which gives rise to useful nonlinear optical qualities. They are the basis of most chromophores. A detailed understanding of the their electronic structure makes it possible to fine-tune their absorption, emission and other electrical properties. 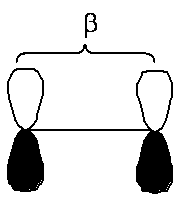 In this model, orbitals that are on atoms that are directly σ-bonded to one another and whose p-orbitals are in a plane can interact. This interaction is called the "electronic coupling" between the orbitals and has units of energy.

In the Hückel approximation this energy is the same for all carbon p-orbitals that are adjacent to on another and is called β. 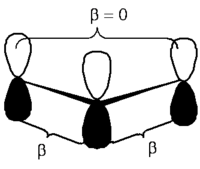 For atoms that are not adjacent to one another β is taken to be zero. Thus in the Hückel approximation there is no interaction between nonadjacent atoms. Even if you distort the system so that nonadjacent atoms are very close they will not be considered because there is not bonding. 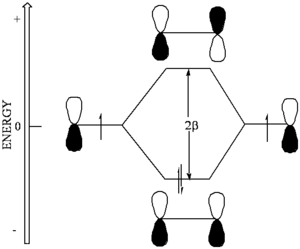 Bonding between atoms with equal electronegativity

If the orbitals that mix are the some energy the mixing can be treated using first order perturbation theory. 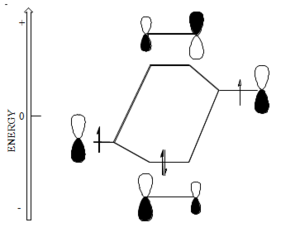 Bonding between atoms with unequal electronegativity, for example oxygen and carbon

As a consequence of this the coefficient of the stabilized orbital is larger on the atom to which it is closer in energy and the same if true for the unfilled orbital. In this example there would be a higher electron density around the oxygen than around the carbon. This molecule would have a dipole moment. The antibonding orbital has a higher coefficient on the carbon. This a proton would tend to react with the oxygen because the highest occupied orbital has a higher electron density with the the oxygen. On the other hand the carbon will be the more electrophillic site. This allows us to make very simple predictions about reactivity.

If you promote an electron from the HOMO to the LUMO the dipole moment of the molecule would decrease. 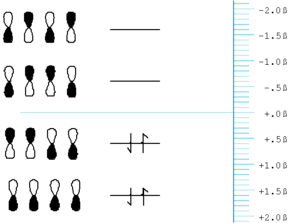 Orbital energy for diagram for butadiene 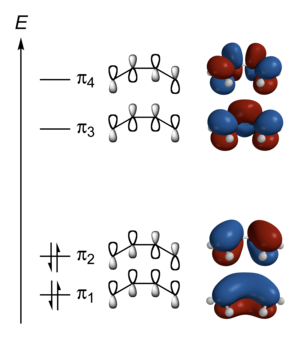 Butadiene with π orbitals (from wikimedia)

We can make molecules easier to oxidize and easier reduce as we increase the length and add more orbitals. From an electron chemical standpoint butadiene is a better electron donor. 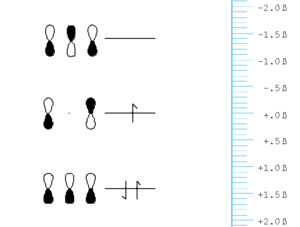 Lets now consider a system with an odd number of atoms, the simplest being allyl.

Note that the are several significant similarities and differences between the orbital in allyl and those of butadiene or ethylene:

The energy difference between the lowest and highest orbital of allyl and is less than the difference with ethylene ( 1.4β compared to 2β). Allyl has a small gap than ethylene.

What do we expect the result of changing the carbon for a more electronegative element to be? 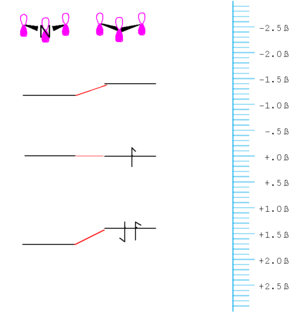 Relative energy levels of carbon chain with and without nitrogen.

For example if you made a molecule allyl cation that has only two electrons in the homo, and then made a corresponding molecule with a nitrogen in the middle. The homo /lumo gap will increase because the HOMO energy level is lowered while the LUMO stays the same. Thus, the most orbitals are stabilized by inclusion of the nitrogen.

Note that the orbital that has a node on the central atom is not affected by this change.

This is how molecular orbital theory helps you predict how the properties of molecules change with additions of particular atoms. 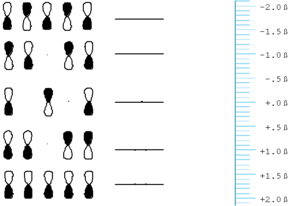 If you consider the pentadienyl anion, radical and cation, that each has nodes on either odd or even atoms in the HOMO or LUMO and that the nodes do not match up in position. The middle orbital has the same energy as carbon. The gap between levels decreases more rapidly than for even numbered orbital molecules.

This is the basis for making some simple predictions about the spectroscopy of so-called cyanine-like molecules upon substitution of atoms along the chain with either electronegative or electropositive elements. Likewise the addition of electron donating and withdrawing groups can have similar effects.

Another distinction between cyanine-like dyes and polyene like dyes is the in polyene there is a complete reversal of the bond order between the π-bonding HOMO and the π-antibonding LUMO. 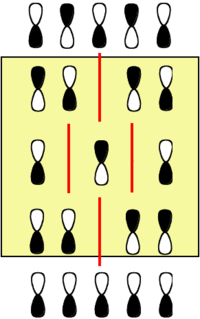 Cyanines
In contrast, in cyanines because typically either the HOMO or the LUMO is non-bonding, and because there are nodes at the atoms rather than between bonds in the frontier orbitals, there tend to be smaller changes in bond-length between the HOMO and LUMO. This will have spectroscopic implications. Anything that pushes electron density onto an atom increases the energy of the atomic orbital associated with that atom. Anything that takes electron density away will decrease the corresponding orbital energy.
Retrieved from "http://photonicswiki.org/index.php?title=Electronic_Coupling_Between_Orbitals&oldid=5921"
Category: