In 2015, about 9.9% of the US consumed energy was from renewable sources accounting for 13.4% of electricity production. 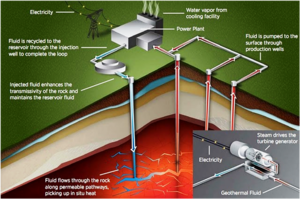 How does it work: Geothermal energy is the heat radiating from under the earth's surface and is completely clean and sustainable. In certain areas, the heat from the magma penetrates up through the earth and heats pockets of water found under ground. Geothermal power plants drill into these underground heated reservoirs and can use the steam released to power a generator. The hot water can be used to boil a different working fluid to power a turbine as well. In the US, 2% of renewable consumption was from geothermal sources.

Pros and Cons: Geothermal energy power plants have been limited to hot spot areas such as areas bordering the ring of fire in the United States (Alaska, Hawaii, California). The are, unlike solar and wind, not weather dependent, completely reliable and predictable and produce electricity year round. Although geothermal plants have a high upfront cost, plants have a high life time and efficiencies will only improve with developments. Thanks to new developments in heat pump technology, geothermal energy can now be tapped almost anywhere because of shallow earth being an almost constant temperature of 60 degrees Fahrenheit. The cost of geothermal energy is expected to be $0.05/kWh for new plants with a geothermal power potential of 35 GW/yr- 2 TW/yr.

The link below is of Iceland's geothermal bakery where they literally bury bread to bake it overnight. The youtube link is of an accidental pilot volcano power plant in Iceland because they accidentally dug too deep and hit lava. Please enjoy. 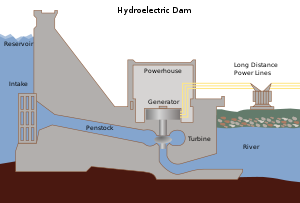 How does it work: Hydropower plants are all powered by the kinetic energy of flowing water. Harnessing hydropower is not a new technology. Waterwheels and watermills have been used to produce flour and pump water into irrigation canals for centuries. Because water is constantly moving in a cycle from evaporation to precipitation, driven by solar energy, and is not used up in the process, this is a major source of renewable energy.

Pros and Cons: Hydropower is limited to areas with flowing water and height, requires significant initial investment, and can have adverse effects on fish migration and important natural areas due to dams. To combat this environmental obstacle, developments have been made in microhydro power when water is siphons off of a water source through pipes and flows through a small generator creating about 5-10kW of electricity. Microhydro power is popular particularly in developing nations for homes. Hydropower is an extremely flexible energy source with electricity outputs easily being changed by the adjustment of water. In 2015, 25% of US renewable consumption was from hydropower with an average cost of $0.03-$0.05/kWh. Hydropower generated 16.6% of the world's electricity at 3288TWh as well as 70% of all renewable energy. The hydropower technical potential is estimated at 16,400 TWh/yr (1.87 TW/yr). The Three Gorges Dam is the largest hydropower dam and largest power station in the world crossing the Yangtze River and generating about 100 TWh in a year. 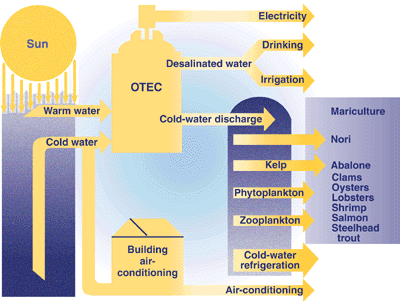 How does it work: Ocean thermal energy conversion (OTEC) uses the solar generated heat energy stored in the ocean and the temperature difference at different depths to generate electricity. The most ideal conditions are when the temperature difference is about 20 degrees celcius, which is common along the tropics. The fundamentals behind closed cycle OTEC are similar to geothermal power plants. The warm seawater is pumped passed a low boiling-point fluid which then vaporizes and turns a generator. The colder seawater is then pumped through to re-condense it. Open cycle OTEC systems pump warm sea water into a low-pressure container creating steam to spin a turbine and is re-condensed by cold sea water.

Pros and Cons:An interesting by-product of this method is fresh, desalinated water making this technology ideal for places like California that have a southern coast but also suffers through tremendous drought. Theoretically, a 2 MW OTEC plant could produce 4,300 cubic meters of fresh water in a day. Exact cost estimates are unknown because there have only been a number of plants creates but estimates show a power generation cost of $0.07/kWh and a global potential of 10TW/yr without affecting ocean's thermal structure. Although environmental adverse effects were projected for this technology, appropriate spacing can eliminate all of the negative effects to marine life. The main drawback of this technology is it requires enormous capital investment which has prevented any major plants from being completed and the fact that only a few hundred land based sites are feasible for an OTEC plant.

How does it work: Although tidal power is not very widespread, it has high potential as Imagea predictable renewable energy. The Earth's tides are generated by the moon's gravitational pull, making it much more reliable than solar or wind energy. The technology is similar to a hydropower dam except that water can flow in both directions, spinning the turbine as the tide rises and lowers and creating electricity.

Pros and Cons: Recent technological developments have been able to eliminate a larger barrage to negate negative environmental impacts. Because tide differences need to be about 5 meters for feasibility of this technology, projections estimate that about 1 TW/yr can be harvesting from tidal areas worldwide and the cost can be lowered from $0.084 to $0.04-$0.065/kWh by 2020 with technological developments and larger scales. Tide based technologies are one of the few that are 100% reliable and predictable.

How does it work: The US coastlines receive 2,100 TWh of untapped incident wave energy creating interest in harnessing this energy for electricity. There are multiple types of wave powered generators but they all involve riding the waves in some way. These point absorber buoys float of the surface of the water and use the rise and fall of waves to drive hydraulic pumps for electricity.

A similar technology is the surface attenuator which involves multiple long floating segments, like a long pool noodle, and the flexing motion caused by the waves generate electricity. Oscillating wave surge converts take the long pool noodle technology except fix one point to a structure. The relative motion of the other end creates energy. Finally, oscillating water columns allows wave motion to push air through a turbine generator.

Pros and Cons: Because wave power is still in very early stages of development, it is still expensive to implement. Wave power put offshore where there is enormous energy potential and the flexibility of location and the area efficiency can negate potential environmental effects. Projections estimate wave energy can produce upwards of 2 TW/yr of electricity with current projected costs at $0.06-$0.075/kWh. 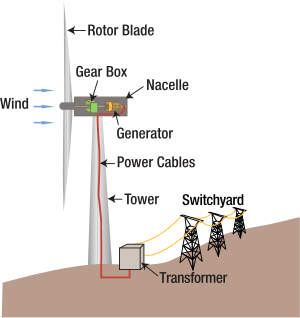 How does it work: Wind energy is another indirect affect of solar energy and is created by Imagethe sun's uneven atmospheric heating. About 1% of total solar energy absorbed is converted into kinetic energy in the atmosphere The air flow spins wind turbines to mechanically power generators for electricity.

Pros and Cons: A few problems with wind power include wind farm sites being in remote locations requiring transmission lines as well as competition for potential spots. The damage to local wildlife due to blades has been practically eliminated in recent years. In 2014, wind power generated 432.42 GW reaching 4% electricity usage worldwide with an average levelized cost of wind power fell to $0.025/kWh stateside. Wind power also generated 5% of total US electricity. Gansu wind farm in China is the largest wind farm producing 6000 MW/yr. Technological advances have also made offshore wind power more feasible with offshore wind farms producing 18TWh in Europe in 2012. Wind power potentials worldwide have been projected at 72 TW/yr.

Cool Application: Recent developments in high altitude wind power should promise for harnessing a more reliable and stronger source of wind energy while eliminating the costs of large land turbines. The following high altitude turbine from Alaeros Energies has a helium filled shell and produced double the amount of power than a land turbine during its test flight.

Because this technology is so new, there is still no consensus on the amount of power this type of wind energy is capable of harnessing or the climate impacts.

How does it work: Biomass stores the sun's energy through photosynthesis which can be released through burning, similar to how we can harness energy with fossil fuels. This process releases the carbon dioxide it absorbed while growing making this technique "carbon neutral" compared to fossil fuels which is introducing new greenhouse gases into the environment.

Pros and Cons: There have been some serious bio-energy debates about whether this claim is actually true based on feed stock type, how transportation, harvesting techniques and feed stock replenishment and they have come to the tremendous conclusion that it...depends. There are also debates about whether this should be considered a renewable energy because of examples of unsustainable harvesting practices. It is generally agreed that bioenergy decreases greenhouse gas emissions so more research is being done to develop its use. One major advantage of biofuels is they can be converted to liquid fuel. In 2015, biomass fuels generated about 5% of energy in the US and cost between $0.15-$0.08/kWh depending on the source. An interesting bioenergy technique is harvesting biogases such as methane from landfills and animal waste, which is a strong green house gas, to generate electricity as well.

Cool Applications: Although crop biofuels have there own intrinsic problems, there is some interesting development in creating a different type of bio based fuel. The following link shows a pilot plant using sewage waste to create crude oils in the same way the earth pressurized bio-remains into what we use as fuel today.

Another interesting type of "biofuels" comes in the form of cows and no it doesn't involve methane. In 2011, the Netherlands was able to create 0.082TWh of energy by harnessing the heat from cow milk. For every liter of milk, 0.7 liters of warm water is produced avoiding around 18-20kton of carbon emissions. This type of heat extraction process is being designed to power the individual dairy farms in the Netherlands.

How does it work: We've already learned about many indirect forms of renewable solar Imageenergy, wind power, hydropower, biomass energy etc, but now let's dive into straight on solar power. Solar energy is light and heat generated by the sun and just one and a half hours of the sunlight that hits the earth can generate power worldwide for one year. Solar power can be directly harnessed through photovoltaics with semiconducting materials.

Electricity can also be generated through indirect means such as concentrated solar power (CSP). (CSP) technology concentrate sunlight to a single point with mirrors where it is converted into thermal energy to produce electricity.

Pros and Cons: Solar energy has the largest energy potential because of its abundance, availability and high energy. The technology for solar is improving as well as the effeciencies and current technologies are already have financial support from governments and require little maintenance. Although solar energy is less predictable, the solar energy potential have been projected at 50-1580 TW/yr and has reached a utility cost of $0.05/kWh.

The Clean Energy Institute's place: CEI research at the CEI is connected in many ways; across disciplines, across scales, and extending from research into commercial applications. To shift our energy system to renewables we need a complete energy system including generation, storage and new grids that can handle the new energy sources. Often research materials and methods in one area have applications in others. Examine this concept map on the many facets of clean energy research. Can you think of other linkages that could be made?