Energy storage is an essential element of a renewable energy system. Energy density, power, efficiency, portability, dispatchability, safety and cost are also considerations. Even a traditional thermal or hydro based energy grid has need for ready storage. Storage systems can generate revenue in a variety of ways including matching supply with demand timing, power conditioning, avoiding costs from more expensive sources. There were 220 MW of storage deployments in 2015.

How does it work: Certain areas that have ready access to hydro reservoirs and generation facilities can use excess power from wind or solar to pump water back up the hill to refill the reservoir. Energy can then be tapped by releasing the water back down the hill to power turbines.

Pros and Cons: This process can be quite efficient (70-80%) with an energy density of 0.5-3 Wh/kg which is why a large volume must be stored in order to make this technology viable for storage. However, there are not many sites suitable for future pumped storage. Pumped hydro storage is the largest source for bulk storage and accounts for 99% of global energy storage with a levelized cost of electricity at $0.05-$0.15/kWh. The DOE plans to increase hydropower by 50% in part by creating more hydrostorage along existing dams boosting current hydropower electricity generation capacity from 100 GW to 150 GW by 2050. 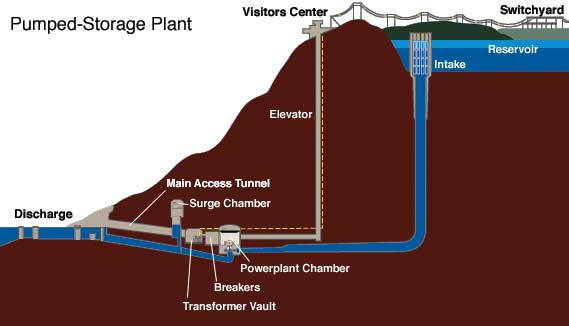 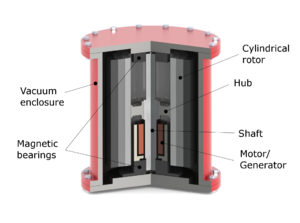 How does it work: These use heavy, finely balanced rotors to store energy in the kinetic energy of the wheel spinning up to 60,000 rpm. During spin up electricity is used to drive the flywheel like a motor, then when the energy is needed the motor becomes a generator and the wheel slows down. 2kW / 6kWh systems are currently available.

Pros and Cons: The main use of this technology is to improve our current electric grid by capturing energy from intermittent sources and deliver it as uninterrupted power improve the quality of electricity and creating regularity. Typical systems have a specific energy of about 5Wh/kg. For the vacuum system, round-trip efficiencies are, on average, 85% and a specific energy of 100-130 Wh/kg. Although they do have high initial acquisition costs and a relatively high standing loss, they also have a long lifespan (such as 20-50% in a few hours were mechanical flywheels), low maintenance and recharge in a matter of minutes rather than hours making them independent of charge or discharge rates.

How does it work: Electricity is used to compressed large volumes of air in underground salt cavities, depleted natural gas cavities, or even underwater bags. The compressed air can then be used to power turbines to recreate electricity.

Pros and Cons: This technology has some geological dependence as rock caverns discharge the storage potential faster than salt caverns with the best potential sites being underground reservoirs. When electricity is needed, the pressurized air is expanded in a turbine which drives a generator for power production. Management of heat produced in compression is essential since pushing this air and compressing it releases heat which can be used for other purposes. The heat can be stored using thermal storage explained below. Very large storage is required to make this economically feasible because of the low storage density of this system. CAES plants are similar to pumped-hydro plants in terms of their output and storage capacity and is another great technology for bulk energy management with levelized cost of electricty at $0.10-$0.30/kWh. The current CAES plants used a diabatic method with a wear heat utilization and have efficiencies of 55%. Adiabatic methods (recovering the heat more efficiently) have efficiencies of 70-80% and the first pilot plant will begin operation in Germany in 2018. Practical achievable specific energies are between 11- 28 Wh/kg. There is almost no self-discharge rate once in the cavern allowing for long term storage. The main drawback is that there are not many suitable underground caverns for this technology and creating a man made cavern is quite costly. .

How does it work: Supercapacitors can be used to store energy for quick discharge, for example on an electric street so it can hop between sets of wires without losing power. In comparison to other capacitors, its plates are much larger and the distance between is smaller. These plates are very porous allowing for more charge storage similar to how a porous sponge can store water. When the capacitor is charged, positive and negative charges both form on the separate plates creating an electric double layer or what looks like a double layer capacitor.

Pros and Cons: Since these capacitors work electrostatically, they can be charged and discharged theoretically any number of times because they have little to no internal resistance or degradation, unlike a traditional battery that works through reversible chemical reactions. Supercapacitors are used in a similar way to flywheels in that they deliver uninterrupted power for higher quality electricity and can be recharged in seconds but also have a lower self discharge rate at 14% per month. The energy density is not great. Specific energies range from 1Wh/kg-30 Wh/kg with a 95% efficiency. The main barrier for further commercial use is the significantly higher cost at $20,000/kWh,

How does it work: Solar power towers use mirrors to heat up an a reservoir of liquid salt. The heat is extracted to run a turbine.

Pros and Cons: This allows the generator to work day and night creating a roundtrip efficiency between 75-80% . Plant sizes are expected to be in the range of 2-5 MW per unit with grouping of units providing GW installations, on par with pumped hydro storage but addressing different necessary environmental conditions. Loss due to discharge is very small for larger plants and this technology has the potential for large scale grid storage. The specific energy of the salts used range from 80-250 Wh/kg with a levelized cost of electricity at $0.15-$0.35/kWh. 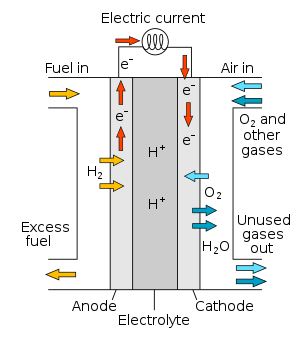 How does it work: Electricity is used to hydrolyze water to make hydrogen which is then compressed and stored. The hydrogen reacts in a fuel cell with atmospheric oxygen to generate electricity.

Pros and Cons: Like batteries, fuel cells also have an anode, cathode, and electrolyte ti transport hydrogen ions (protons) to move between the cell. The anode and cathodes have catalysts that allow this oxidation reaction to occur. Unlike batteries, hydrogen fuel cells can run continuously as long as the fuel is supplied. Fuel cells can have efficiencies between 40-60% or up to theoretically 85% with sufficient heat recycling. Compressed hydrogen can have a specific energy of 280-400 Wh/L. The fuel cell market to expected to reach 50 GW/yr of storage potential by 2020. 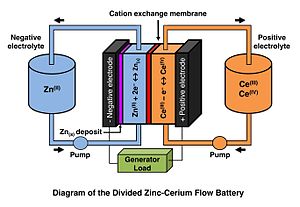 How does it work: This battery is recharged by two chemical components (such as zinc and cerium below) dissolved in a liquid. This technology is similar to both a fuel cell and battery where the liquid source is tapped for energy to create electricity but can also be used to recharge in the same system. Replacing the electrolyte liquid instantly recharges this battery. Conventional batteries store energy in the electrode material while these flow batteries use the electrolyte liquid.

Pros and Cons: Depending on the chemical reaction, round trip efficiency of flow for Vanadium Redox batteries, for example, can range from 75-85% with a specific energy of 10-20 Wh/kg and have a levelized cost of electricity at $0.25-$0.30/kWh.

How does it work: Lead acid batteries rely on the same basic principles of battery storage with an anode, cathode and electrolyte. 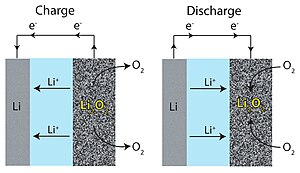 How does it work: Lithium ion batteries are characterized by the transfer of lithium ions between electrodes during charging and discharging. The lithiated metal oxides have high cell voltages and corresponding high energy densities making them a valuable energy storage source.

Pros and Cons: Electric cars have driven the rapid improvement of the lithium ion battery. Tesla is selling home battery pack the "power wall" that works with home solar generation to achieve better economics and flexibility for timing energy production and consumption as well as providing a backup system for those "off the grid". Levelized cost of electricity range from $0.25-$0.50/kWh. A lithium ion battery has an energy density of 100-265 Wh/kg with efficiencies of 80-90%. Standing discharge rate is extremely low at 5% per month, but these devices are temperature dependent with aging occurring much faster at high temperatures. California hosts the world's largest lithium ion battery at 8MW/32MWh 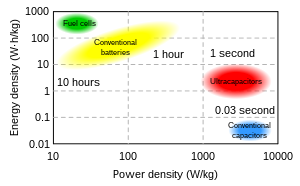 As you can see, there are many types of energy storage. Although one specific type may not have as high energy density as another, we must consider many variables before deciding which battery is ideal for a specific purpose. The follow graphs compare different energy storage systems in terms of energy density, power, discharge time, and current capacity.

The following compares the cost/kwh of various storage technologies. Image

ImageUS energy storage market has been projected to reach 861 MW annually and with a value at $1.5 billion by 2019. This 11 times larger than the market size in 2014.

China has the largest electric power network in the world as well as some of the largest wind and solar farms with an ambitious goal of 50 GW solar and 200 GW of wind energy by 2020. China is projected to have 10 million electric vehicles on it's roads by 2020. 74% of its current energy storage batteries are lithium ion, followed by 17% lead acid and 9% flow batteries. Its energy storage market is expected to grow to $8.5 billion by 2025.

Japan is a world leader in energy storage with the only sea-water pumped hydro installation, a generous subsidy program of 66% of the cost for homes that install lithium ion battery and had 300MW of sodium-sulfur batteries in 2014. Japan has been transitioning from nuclear power, has a target of 30% renewable energy by 2030 and of producing half of the world's battery storage market by 2020.

Germany projects having 80% renewable energy by 2050 requiring at least 40 TWh of storage potential by 2040. Various German organizations have funded 186 projects with a total of 202 million euros. The German electrical storage market is expected to at least double by 2025.

Finally, our last trip in the storage around the world, Australia. Australia has the largest grid connected PV solar system with 22% of homes having solar panels. Most of Australia's energy storage growth has been off grid with PV and/or wind sources. The renewable off grid market potential is expected to grow to 200MW short term to over 1GW in the long term.