Amorphous polymers are desirable materials for several reasons however in order to take full advantage of the EO potential of the polymer embedded chromophores these molecules must be well organized in the bulk material. Poling is the process of bringing chromophores into a desired alignment in a material.

Linear In linear optics an applied field results in a linear polarization response where the refractive index n and therefore the susceptibility Χ(1) is not dependent on the electric field. When the field is low higher order terms are insignificant and can be ignored.

Non-linear When a nonlinear material is used with a powerful laser creating a high electric field the susceptibility is dependent on E due to higher order nonlinear terms.

The polarization density can be written as a Taylor series

Index of refraction is related to susceptibility (and therefore ultimately back to polarizability) by:

Electro-optic effect Consider the case where one field is E1cos[ωt] and second field is a static DC electric field (or very low frequency DC field) of magnitude E2. The second-order term of the induced polarization simply becomes:

Notice that the second term χ(2) is field dependent.

For many years it had been suggested that electro-optic polymers could exhibit large r33 greatly surpassing that of a technologically important crystal, lithium niobate (LiNb03). It is transparent, it is inexpensive, it can be grown in large sheets, and it has an r33 of 30.5 pm/V in the "telecommunications" wavelengths of 1.3 μm. This is a reasonable r33 that allows you to build devices. When we build organics we have synthesize new compounds, worry about stability, worry about orientation, and how to keep them poled. But there are significant advantages in using organics.

While there are both electronic and vibrational components to the non-linearity in lithium niobate, a large component is vibrational. This puts an upper limit on the frequency with which that LiNbO3 can be modulated. If a driving field approaches the vibrational frequency then the molecules cannot respond quickly to the applied field. The response trails off and there is only the electronic contribution for the non-linearity.

Organic materials are completely dominated by the electronic contributions and therefore can be modulated at very high frequencies.

It is also possible to get organics with an r33 that is much higher (for example 55 pm/V) than LiNbO3. This means that the Vπ (the voltage required for a π phase shift) can be less to get the same change in optical property.

Finally it is possible to integrate electronic with optical parts right on a chip. Polymer technology is going to make it much easier to combine these materials on a chip.

In the field of silicon photonics there are waveguides built with ebeam lithography on which the polymer can be spin coated and fill the channels. Organics are amorphous whereas LiNbO3 is a single crystal material which makes it very challenging to apply to chip-scale device.

An electrode is located on either side of the light path which passes through an electro optical material. An opposite field can be applied to each path slowing the light on one side and speeding the light on the other. There are many factors that contribute to the figure of merit Vpi (the voltage that is required to shift the wave one half of a wavelength). A longer optical wavelength is better. A long interaction length gives more time for the material to respond to the field, but this means the optical material must be very clear so that optical intensity is not lost. Light intensity can be lost by absorption, diffraction and scattering. The 1.31 microns and 1.55 microns are popular telecommunication wavelengths because they are easily propagated through optical fiber. This is the typical wavelength that the modulators need to work with. Many NLO materials absorb in the 650- 750 nm range. 640 nm is about 2 eV (1ev = 1240/ wavelength nm); 1.55 microns is about .8 eV. A lot of the molecules are absorbing at about 700nm (1.7 eV). The absorption tail of a molecule can go out a long ways. At some point you have to worry about C-H bonds because of overtones due the C-H stretching frequency that occur at 3000 cm-1 (3333 nm). This means there could be some absorption at 1600 nm (1/2 of 3333 nm) due to C-H overtones. This is a problem.

Poling of Chromophores in Polymers

The general approach that has been employed to create a second-order nonlinear optical material has been to assemble a bulk material using an inert “Host” material loaded with active “Chromophores”, molecules that have a high first hyperpolarizability (beta), and then get those molecules oriented in the same direction. For now we will examine orientation for high EO coefficient and will ignore the orientation required for second harmonic generation which requires a different orientation.

Orientation can be achieved with crystalline materials. The Marder group was able to develop crystals of DAST. They were working with a Japanese group at the same time who succeeded in making a crystal of the hydrate of the material due to their high local humidity. Marder’s group in California was able to make the DAST crystal due to the low local humidity. One crystal was centrosymmetric and one was non-centrosymmetric.) Growing crystals is very difficult. Another group spent 10 years developing the method to grow one crystal. (Rainbow Photonics) 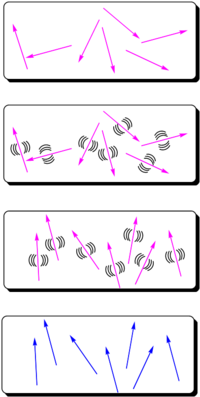 Sequence of a poling a chromophore in a glassy polymer

The resulting non-centrosymmetric structure contains the molecular units oriented on the average normal to the film (C∞v symmetry). In this state, the electric field of an optical beam propagating through the film can be maximally modified when the field is parallel to the orientated molecular units. 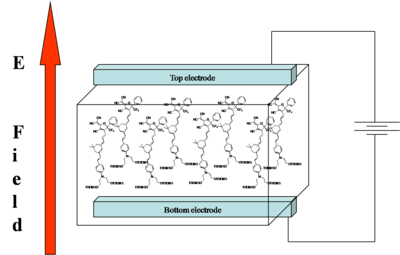 A DC electric field is a applied to a polymer as it passes through its glass stage.

The goal of "poling" is to get all the chromophores to orient the same direction in a macroscopic sample. There are several ways to do this. We can place the chromophore in a host matrix like a commercial polymer, heat it up to the glass transition temperature, and apply an electric field. The dielectric moment of the chromophore interacting with the field will cause some ordering.

The order parameter will be the dipole moment interaction divided by the 5 times the thermal energy. Unfortunately chromophores have strong intermolecular electrostatic interactions such as dipole-dipole interactions. So this going to influence what we see. 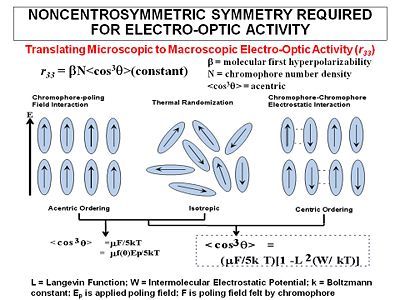 In this Flash Animation various competing factors in NLO materials design for poling are illustrated. You can control the temperature, the poling field strength with the slide bars. Also the dipole moment of the chromophore and the chromophore loading can be input. The <cos3θ> term (the order parameter) is calculated based on the average angle of the molecules with respect to 0 ° (vertical, pointing towards the top). (This is an instructional interaction, not a full scale scientific simulation). Try these virtual experiments?

The magnitude of the second-order NLO effect in a poled polymer film is related to several factors.

Using a non-interacting oriented molecular gas model, the follow equation has been derived to describe the second-order susceptibility in the direction of the poling field (χ (2)333). It is calculated:

is the number density of the chromophores in the material

and the order parameter is determined by :

is the dipole moment of the molecule (the larger the dipole, the more it will respond to the field)

is the strength of the applied electric field

is the Boltzman constant, T is temperature in Kelvin

is a system dependent factor equal to 5 for isotropic systems, and 1 for ideal liquid crystalline systems (Ising systems)

In liquid crystals the orientation of one molecule can affect neighboring molecules (cooperativity) <cos3θ> is the induced polar order which is an average angular orientation where theta is the angle between the poling axis and the molecular dipole moment of the chromophores. Molecules with large dipole moments will tend to repel and that interferes with poling especially when they get too close (high concentration).

This equation is valid a low field, :

When there is centric ordering

is the intermolecular electrostatic potential

is the Langevin function

is the poling field felt by the chromophore

This simulation shows what happens when molecules with dipoles get close to each other. Click on either of the two chromophores on the right and drag them next to the one in the middle. The "plump" chromophore has been designed to have bulky side groups that prevent the central chain from getting too close to adjacent dipoles. 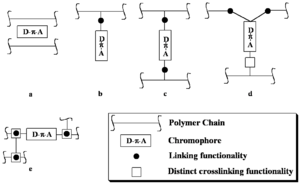 The poled orientation is thermodynamically unstable and therefore the orientation quickly decays in low Tg polymers such as poly(methylmethacrylate), resulting in a greatly reduced nonlinearity. The diagram show several strategies for linking chromophores to polymers so they are more constrained.

Accordingly, several groups have explored covalently attached chromophores to polyimides either in the main chain or as a side chain. This approach can lead to polymers with exceptional thermal stability. Lately, Jen's group has reported a 2-step synthesis for NLO side-chain aromatic polyimides. The advantages of this procedure include the ease in controlling the loading level of the chromophore and adjusting the polymer backbone rigidity.

An important aspect of research and development is connecting fundamental science to applied technology. Theoretical methods allow us to predict the NLO activity of materials and to rationally design materials that will have desired properties.

Quantum mechanics has helped improve non-linear optical activity (NLO). The molecular first hyperpolarizability, that is, the charge re-distribution you get from the application of an electric field, has gone up exponentially over the recent years. This improvement is even greater than Moore’s law. In addition statistical mechanics has help improve the macroscopic EO activity.

is the electro-optic coefficient

is the molecular first hyperpolarizability

is the number density of chromophores in the polymer

is the order parameter 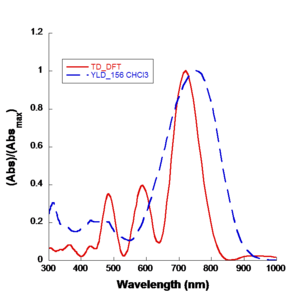 Density Functional Theory (DFT) resulted in a Nobel Prize in physics in 2000. Basically you are replacing a wave function computation with a density. Density is

the product of two wave functions. That has some computational speed advantages. But the major advance is Real time Time-Dependent Density Functional Theory (RT-DFT). This gives you a mechanism for incorporating time dependent phenomenon like applied radiation fields, optical fields, and internal fluctuation of charge fields.

For example, when you place a chromophore in a host material the host is typically a dielectric and it will exert an electric field on the chromophore. You want to be able to take both of these into account. The end result is that you are getting quantitative simulation of linear and non-linear optical properties. 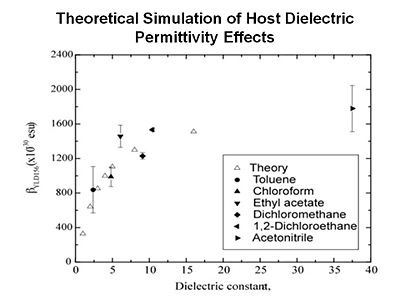 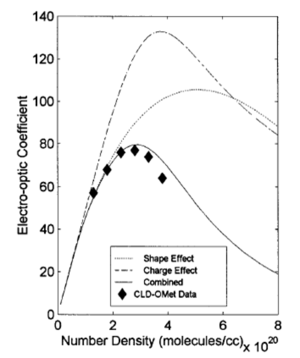 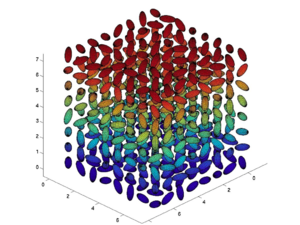 Monte Carlo simulations can be used to try different combinations of variables of number density, field strength, matrix and dipole moment. This theoretical model reveals that chromophore shape has a big effect on the loading parameter (n<cos3θ>) 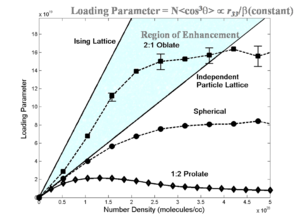 Statistical mechanics has helped explain experimental data. Notice that if we go from a prolate ellipsoid shape to a spherical structure the EO activity can be improved. This has been experimentally observed. This can be used to produce an analytical expression to tell where the maximum EO activity will occur. More importantly it has given us methods such as shape engineering. 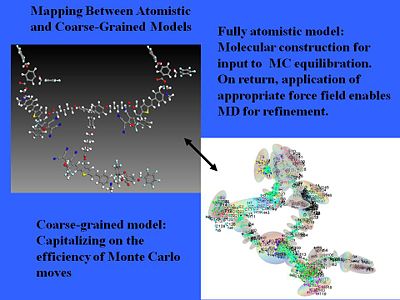 We can even treat more complicated structures. We can use pseudo atomistic Monte Carlo calculations that treat anything that has high conjugation without internal motion as more or less a rigid object and then you correct electron distribution over that object. That will simplify a normal fully atomistic calculation. A chemical model becomes an electrostatic surface. 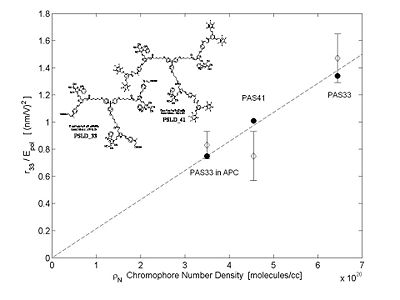 The beauty of this is that it gives you a quantitative prediction of EO activity. This led to the to the design of branched dendrimers which cause steric interactions that helps keep isolated chromophores from interacting each other so they don't line up.

Once there is a structure in mind an organic synthesis pathway can be devised.

The combination of new QM and SM methods permits quantitative prediction of macroscopic electro-optic activity--Yes, we really do need “Numbers”!