Quantum-Mechanical Theory of Molecular Polarizabilities up to Third Order

Our goal is to be able to relate the chemical structure and the nature of the pi-conjugated backbone, and the nature of donor and acceptors to the to kind of non-linear response that can be measured or calculated. 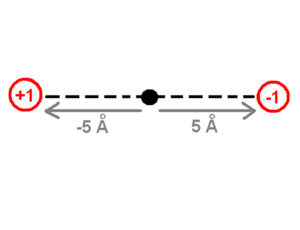 In the case of point charges where it is easy to describe the degree of dependencies or on the system of coordinates.

is the dipole for point charges

is the dipole for a molecule

is the wave function for position r

is the dipole operator relating the charge and position of charges.

This is just the Dirac expression for this integral expression.

Since r, the operator, multiplies but not modifies the wave function, the r term can be rearranged in this way.

This means that if the two charges separate due to the polar attraction of the electric field of the light, it is clear that as the distance between two charges get larger, the dipole will become larger as well. Thus, the r value shows that dipole moment will be larger when the charges separate over a larger distance.

We will examine the behavior of individual molecule and then see what happens at the level of the material when many molecules come together.

the dipole; a vector

the electric field; a vector

the polarizability is a tensor of rank 2

Those polarizability tensor components are a function of the wavelength.

is the electric permittivity of a vacuum

is the electric susceptibility of the material; a tensor

The displaced electric (D) field takes into account the external field, like the field due to the light and the polarization.

The permittivity and dielectric constant are a function of frequency (ω) or wavelenght (λ).

is the permittivity of vacuum

is the magnetic constant or permeability of vacuum

In the case of weakly magnetic materials μ = μ0

Also, note that n, mu and Epsilon are also complex quantities because they may involve both dispersion effects and attenuation effects. As soon as there is absorption, then that becomes an imaginary component to the expression. Thus, all of those are complex numbers.