Overview Physics of XPS and UPS

OLEDs and OPVs consist of thin films of organic materials, sandwiched between contacting electrodes. We need analytical tools which tell us: 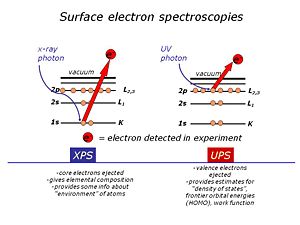 We use high-vacuum surface electron spectroscopies: X-ray photoelectron spectroscopy (XPS)and UV-photoelectron spectroscopy (UPS) to provide the elemental, molecular and energetic information we require about these materials. Surface analysis is carried out in high vacuum spectrometers, with sophisticated sample handling capabilities. The sample is prepared in a chamber to which a variety of devices can be attached. The idea is to keep the surface as clean as possible, and to selectively add monolayers of organic materials to these surfaces, without the need to break vacuum between analyses. The sample is located at the center of the analytical chamber, and positioned so that we can excite it with either X-rays or UV photons. Once the photoelectrons are ejected from the sample, they are collected by a series of focusing lenses, and then separated according to their kinetic energy in a “hemispherical” analyzer. We use either a single “channeltron” detector (UPS) or a multi-channel detector(XPS) 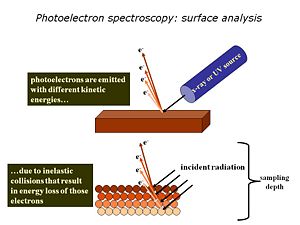 The small sampling depth of XPS and UPS arises because most of the photoelectrons generated do NOT make it out of the solid – they are scattered below the surface and not detected. Only those within 1-10 nm of the surface get out and can be analyzed.