The next question is what happens when the electronic coupling is too small?

The electronic coupling may be small because the crystal structure leads to smaller electronic coupling, or because vibrations disorder the system. In this case the charge carriers become localized and there is polaron formation, leading to geometry relaxation. This is the hopping regime. At a molecular level electron hopping can be cast in the framework of Marcus theory of electron-transfer reactions. Up until recently researchers were using purely phenomenological models. 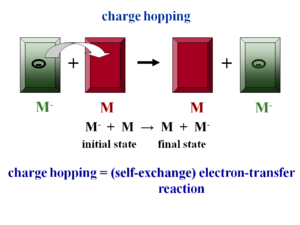 Intramolecular reorganization energy is the energy cost due to geometry modifications to go from a neutral to a charged oligomer and vice versa. It is one of the key characteristics that control charge mobility in organic electronics.

Reorganizatin energy can be stated with the Marcus equation:

is the electron transfer rate

is the electronic coupling between the states

is the Gibbs free energy change 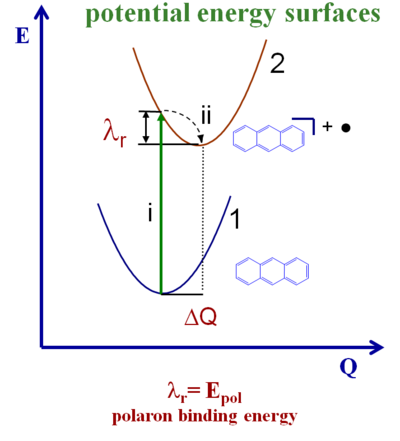 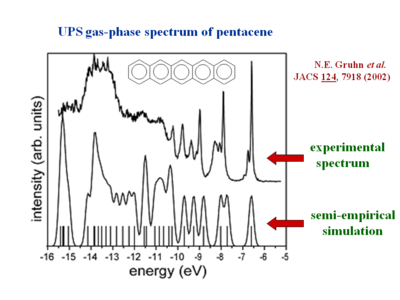 The gas phase UPS was used to measure pentacene. The experimental data shows good agreement with the simulation. The resolution for gas phase UPS is smaller than .01 eV. The high resolution UPS view shows that the first ionization peak (taking an electron from the HOMO) has vibrations. 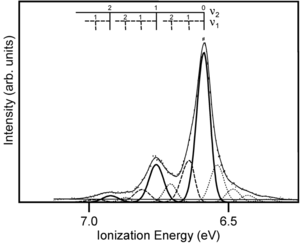 Zooming in on the spectra you see a vibronic progression typical of coupling of between vibrational modes as the molecules goes to the optimal geometry of the ionized state. This is similar to the result when looking at absorption spectra for molecules going to an excited state. The vibronic progression can be different. Nothing demands that the optimal ionization geometry needs to be similar to the excited state geometry, but in fact in many pi conjugated systems they are often quite similar. By deconvolution of these vibronic peaks you can arrive at a value for the relaxation energy, and if you double that (assuming the relaxations going from neutral to ionized state, and from ionized to neutral state are the same) you get the reorganization energy.

Experimental estimate for intramolecular reorganization energy for λ I : 0.12 eV

The reorganization energy decreases with the increase in size of the molecule. If you plotted these numbers as a function of 1/n the number of π electrons in the system you would get a straight line. Pentacene has a significantly lower reorganization energy than shorter molecules therefore a thin film of pentacene would have a higher electron transfer rate and charge mobility. Pentacene also had a higher electronic coupling than in the smaller molecules in the series.

Pentacene provides for a rigid macrocyclic backbone and highly delocalized frontier MO’s so there is less possibility of vibration. 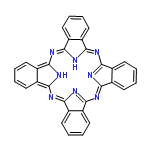 Triphenyldiamine (TPD) is very often used as a hole transport material. One would hope that a hole transport material would have low reorganization energy and high hole mobility. The reorganization for TPD is actually three times that of pentacene. Reorganization energy in Marcus equation go into an exponential so a factor of three becomes quite significant. Why is it much larger in TPD than in pentacene? In the TPD the geometry relaxations are confined to the biphenyl, binitrogen moiety. The external rings hardly participate in the relaxation that occurs in the ionized state. The wave function of the radical cation is confined to the central part of the molecule. The more confined the ionized state the larger the reorganization energy because an excess of charge or deficit of charge in a small area creates a very large difference. In ionized state in pentacene is spread over 22 π electrons so there is much less perturbation. 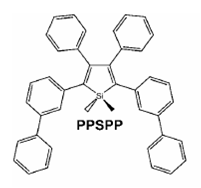 Siloles are used as electron transport materials. The reorganization energy for the ion state is huge; .5 eV. In this case all the geometry relaxation happens in only the silone ring itself. One more electron added to a single ring makes a large difference in bond lengths of .1Å. In the case of pentacene the geometry change is or .01-02Å. So the more you delocalize the wave function of the ionized state the smaller the perturbation and the smaller the reorganization energy.

In order to determine if a molecule will have favorable transport properties in a device you would like to know how mobility changes going from low to high temperature when the material in a thin film or crystalline form. Marcus theory does allow you to do that. The electronic couple is derived for a single crystal structure but the Marcus equation doesn’t consider modifications in electronic coupling that occur with increasing temperature. The intermolecular component of reorganization energy (λ s)(s stands for surrounding) is treated in a purely classical way in Marcus theory.

When Marcus developed the theory 50 years ago he was looking at electron transfer reactions in solution in which case the “surrounding” was defined by the way the solvents arranged around the sites where electron transfer occurred. For example in organo-metallic systems with ruthenium 2 and ruthenium 3 there will be electron transfer in aqueous solution. There is an orientation of the water molecules surrounding the 2+ ion that is different from the arrangement around the 3+ ions. Rearrangement of the solvent involves rotations and translations that are very slow and involve smaller energies. Because these processes are slow its ok to treat them in a classical (simple) way. But intermolecular reorganization energy needs to be taken into account at the quantum level.