Luminescent solar concentrators (LSCs) are planar translucent devices that absorb light over a broad area that is subsequently guided to their edges. The light at the edges of the LSC is geometrically concentrated and spectrally downshifted. Solar cells can be attached to the edge of LSCs, where they can use the concentrated light to produce current. LSCs are passive, work well with indirect light and can be made to cover large areas, such as windows. Thus, LSCs occupy a unique space in solar energy harvesting and conversion technology that requires minimal changes to current infrastructure. In practice, conventional (reflective) solar concentrators need to have mobile sun-tracking mechanisms in order to avoid shading the solar cells, making the technology expensive and impractical. In addition, reflective concentrators are not effective at utilizing diffuse radiation, which is especially significant in areas that receive less direct sunlight.

LSCs are a promising alternative because they do not require a sun-tracking mechanism in order to collect, concentrate and deliver light to the solar cell, and can utilize diffuse radiation as well as direct insolation. An LSC consists of a translucent waveguide material embedded with luminescent dyes or luminescent nanomaterials (luminophores). The luminophores absorb sunlight and emit (fluoresce) lower-energy light that is propagated to the edge of the device. There, the light is absorbed by a narrow, high-efficiency solar cell. LSCs are still an emerging technology, and thus are relatively low efficiency and have not gone commercial. 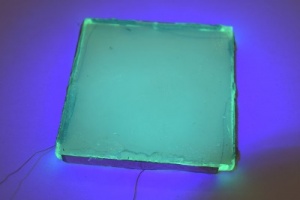 A piece of fluorescent plastic has solar cells surrounding the edge.

Quantum dots are semiconductor nanocrystals (NCs) on the scale of a few nanometers, or several hundred atoms. At this size, quantum effects dominate and the electrons are quantum confined to narrow energy levels determined by the size of the particle. This means that the absorption and emission properties of the NCs can be tuned by changing the size of the NC.

NCs are good candidates for LSC luminophores due to their high absorption coefficients, narrow emission profiles and solution processability. In addition, the luminescent properties of NCs can be tuned in such a way that reabsorption of their own emission is minimized. The ability to emit light of lower energy than absorbed light, a process known as downconversion, is critical for optimal LSC performance. Downconversion ensures that emitted light is not reabsorbed by other luminophores, thus increasing the probability that an emitted photon will reach the edge of the LSC. Downconversion in NCs can be efficiently achieved by introducing impurity ions into the crystal lattice, a process known as doping. These impurity ions can impart mid-bandgap energy states to the NC that determine its luminescent properties. Several impurity ions with well-known luminescent properties can be identified, and there is a current research emphasis on developing chemistries for doping these impurity ions into nanocrystals that can efficiently sensitize their emission. Such materials would be good candidates for LSC applications.