Liquid crystalline materials have optical properties that are intermediate between perfectly ordered crystals and completely unordered liquids. The molecules involved are able to refract light differently depending on their orientation. This can be changed by magnetism, by an electrical field, or by changing temperature. In this introduction to liquid cyrstals we will apply ideas including index of refraction, polarizability, crystal lattices and intermolecular forces. 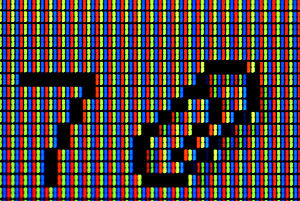 LCD screen close up showing how colors are made on a white background. R is seen red, G green and B blue. The letter R has the blue and green elements off and the red on, resulting the Red color. The white background is a result of all colors on.

Liquid crystals are widely used for electronic displays and TVs. In these devices an array electrically controlled LC pixels are placed in front of colored light sources or reflect light differentially as in a calculator. An LC filter can also be used to modulate a projected light source as in an LCD projector. Liquid crystal paint can be used to indicated temperature and pressure which can then be analyzed optically.

What is a liquid crystal?

Liquid crystals are anisotropic materials. This is important for their function in LC displays.

In a crystal there is periodicity of a lattice in all three directions. In a liquid there is neither orientational or positional order. 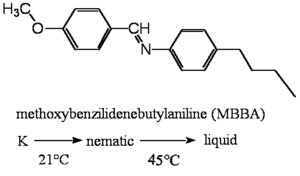 One of the first papers about liquid cyrstals appeared more than 100 years ago.

1927 - W. Friederickz et al. ([4]) described the influence of electrical and magnetic fields on smectic, nematic and cholesteric LCs. Marconi Wireless Telegraph Co was awarded a patent on a light valve in 1936.

1959 - W. Maier and S. Saupe ([5]) published what is now known as the Maier-Saupe theory of liquid crystals which suggests the temperature at which material move from liquid crystalline to isotropic. It is summarized in the equation:

Where: A is a molecular parameter including the polarizability anisotropy, k is Boltzmann's constant, v is the molar volume.

Then there was a rediscovery of electro-optical effects and their applications in LC display:

1991 - Pierre-Gilles de Gennes, Nobel Prize Physics 1991, studied how extremely complex forms of matter behave during the transition from order to disorder. He showed how electrically or mechanically induced phase changes transform liquid crystals from a transparent to an opaque state, the phenomenon exploited in liquid-crystal.

So there is a long research history in liquid crystals and much current work as well.