A liquid crystal display consists of thousands individual LC domains that are individually addressable. Each cell represents a pixel of the display.

If two polarizers are aligned the same way, then light gets through. If they are cross polarized light does not get through.

Dynamic scattering mode displays The first LCD, demonstrated at RCA Corporation laboratories in 1963, used an effect known as the dynamic scattering mode (DSM), which caused the liquid crystal to turn cloudy and scatter light under an applied voltage. Today this is not often used, however in polymer disperse LC light scattering is still used for specialty windows.

The twisted nematic liquid crystal effectively changes the polarization over a short distance so that light is transmitted. When an electric field is applied the molecules reorient themselves so that there is no twist and light can not pass.

In a liquid display there are cross polarized filters. The clear indium tin oxide (ITO) layer is coated with an alignment layer that aligns the liquid crystals with the polarizer. At the other side of the display another alignment layer is set perpendicular to the first. The director of the nematic crystal rotates gradually from one side of the display to the other until it is 90 degrees. Each molecule couples strongly with the adjacent molecules. The twisted nematic is able to rotate the polarized beam of light until it is aligned with the second polarizing filter. When there is no applied electric field light can get through.

When an electric field is applied there is a Freedricks transition, the nematic twist is destroyed, and the molecules align perpendicular to the incoming light. The incoming light sees an essentially isotropic material and its polarization is not changed. When the light reaches the second polarizer it is blocked.

The next generation of LCDs used the twisted nematic (TN) effect, developed at Hoffmann-La Roche, Inc., in 1971 and is still used in watches and calculators today. If you put a white back light behind the display and then have red, green and blue filters over each cell.

There are two ways of addressing displays.

In a passive matrix an external switching mechanism controls electricity to LC pixels one at a time. In an active display there is a transistor for each pixel. All transistors can be addressed at the same time.

In passive matrix there are rows and columns of electrodes which are energized sequentially allowing one pixel at a time to be addressed. The maximum refresh rate is limited by the total number of pixels. In a 4 by 4 (16 cell ) array the refresh rate of a cell is 1/16 of the total. 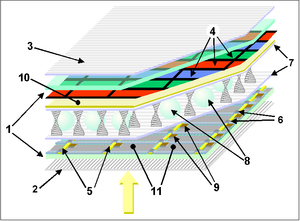 Thin-film transistor display (TFT) developed in 1973 at the Westinghouse Electric Corporation. Here a thin-film transistor (TFT) is used to address each pixel. You can address all pixels at the same time so the refresh rate is exponentially faster. In a typical display there are millions of transistors and a failed transistor means a failed pixel. The first displays of this type were very expensive because of reliability issues. 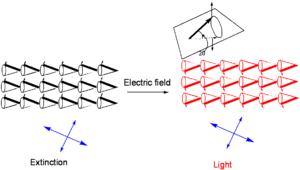 Orientation of ferroelectric molecules altered by an applied electric field.

Ferroelectric displays can be very fast and use low voltages. In the presence of an electric field the ferroelectric molecules are reoriented, changing its director and thereby being clocked or transmitted by the cross polarizing filter.