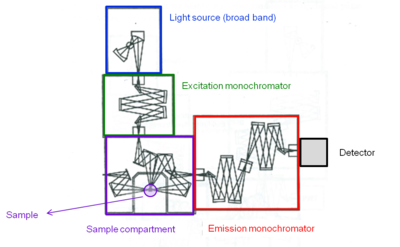 A fluorometer consists of an excitation monochromator which directs light of specific wavelength on a sample. A fluorescent sample produces and emission spectrum that is measured through a monochromator connected to a photomultiplier detector similar to spectrophotometer. 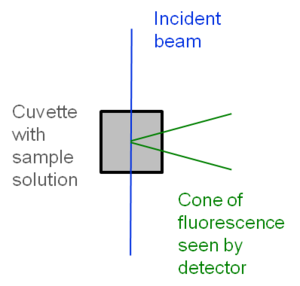 Excitation and fluorescence of sample in cuvette

One significant use of the fluorometer (or fluorimeter) is the determination of the fluorescence quantum yield. This is done using a relative method based on a reference compound of known quantum yield. The unknown sample and the reference sample are measured at the same excitation wavelengths and measurement conditions. The wavelength-integrated fluorescent intensity of both materials are then used in the calculation:

φ is the quantum yield

A= absorbance at excitation wavelength

Therefore the intensity has changed only by 2%

However, depending on absorption spectrometer used, measurement of A in this range may not be accurate enough. How to proceed? 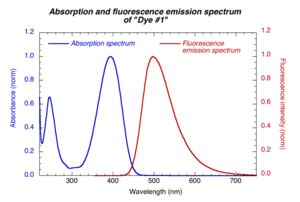 Excitation wavelength should be within the absorption band of the compounds

Its always a good idea to have multiple data points! Prepare multiple dilutions and then measure fluorescence emission spectrum of each solution. Determine the slope of the line F/A for sample and reference. Deviations from linearity could indicate that emission was affected by reabsorption 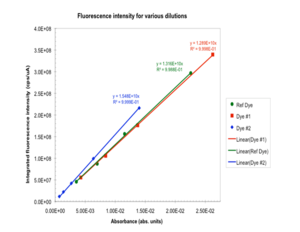 Reabsorption is the absorption of the emitted light by the same solution before light exits cuvette. This is more significant for compounds with small Stokes shifts. Reabsorption can appear as a redshift (or decrease in fluorescence intensity on the short wavelength portion of the spectrum). The effect can be minimized by reducing concentration of solution. Corrected fluorescence spectra 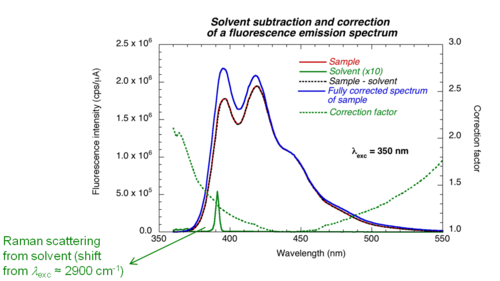 Detectors and gratings do not have the same efficiency at all wavelengths. Therefore the results need to be corrected by a factor that accounts for wavelength response of the instrument. The contribution of the solvent (Raman scattering) and noise (dark counts) should also be subtracted.