The Femtosecond Pump Probe Spectrometer is used to measure absorption of species in the excited state. It is sometimes called two dimensional spectroscopy because it provided temporal as well as spectral information. Pump beam at a particular wavelength is pulsed on a sample just femtoseconds before another broad spectrum probe beam is pulsed on the sample. The probe beam is then analyzed for absorption by wavelength.

Chemical species are driven into the excited state by a of monochromatic pump laser and the spectral qualities are measured with a broad spectrum probe laser. Both the pump and probe are extremely short duration, about 100 femtoseconds. The delay between the pump and the probe is controlled by changing the length of the optical path with moveable mirror. The system is able to generate probe wavelengths in many regions of the spectrum (i.e. UV: 300 -600 nm and NIR: 800-1650 nm) 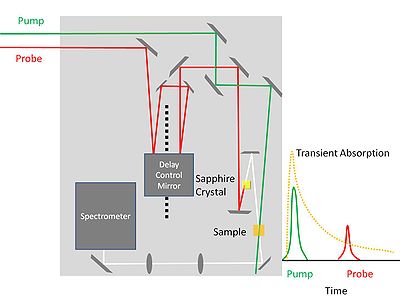 The pump pushes the sample into the excited state. After a short delay the probe beam is passed through the same to measure absorption.Layout of pump probe spectrograph 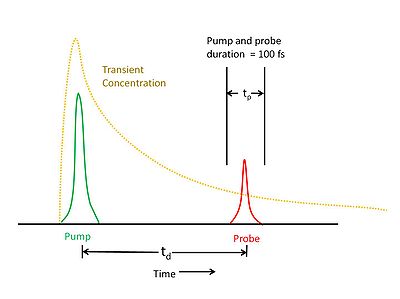 Td is the time delay between pump and probe. This allows you to study the spectral response during a complex decay pathway. 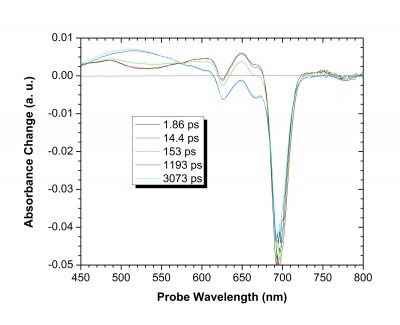 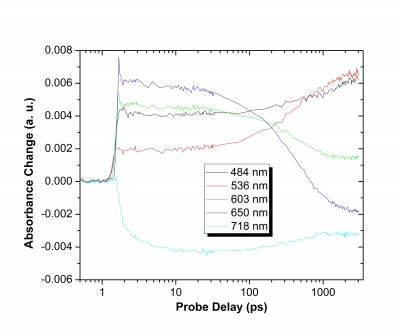 Kinetics of exciting state absorbance at different wavelengths as a function of probe delay.