External Quantum Efficiency (EQE) for a photovoltaic device is the ratio of extracted free charge carriers to incident photons. This ratio is obtained by measuring the photocurrent spectrum of the photovoltaic device under test and comparing it to the photocurrent spectrum of a calibrated reference photodetector, thereby removing the spectral characteristics of the test system. Relative and arbitrary unit EQE measurements can be obtained quite easily when care is taken to ensure similar test conditions for each device under test. Quantitatively accurate measurements require the user to pay attention to details such as illumination intensity and flux distribution of the light source[ref], optical reflectance and interference in device and test chamber[refs], device temperature[ref], and also the definition of the effective active area[ref]. With all of these considerations in addition to the variability of device fabrication protocol in different laboratories, the standardized power conversion efficiency measurement may make the best universal benchmark for device performance. However, the EQE measurement can be broken up into different spectral components and allows for the comparison and analysis of device physics.

The monochromator is controlled by a customized Lab View application and the software automatically records photocurrent from the device at a specified series of wavelengths. 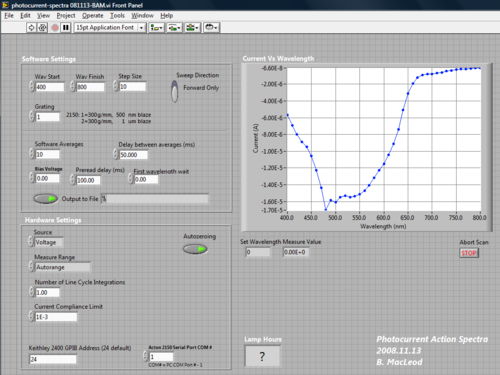 This produces an series of wavelength / current data pairs which can be brought into Excel to calculated EQE graph the results. 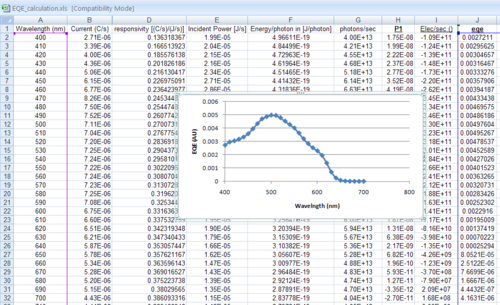 The spreadsheet columns are as follows.