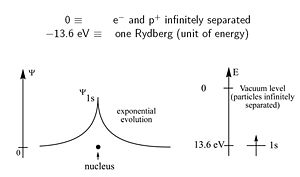 When two hydrogen atoms approach one another: their ψ1s wave functions start overlapping and the 1s electrons start interacting. Molecular orbitals (MO) can be described using the atomic orbitals of the atoms forming the molecule. The hydrogen atom is the only element with an exact solution using Schrodingers equation. Even helium can not be solved exactly. The hydrogen molecule can be described using Linear Combination of Atomic Orbitals(LCAO). For n atomic orbitals you get n molecular orbitals. 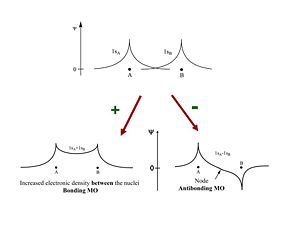 The two wave functions 1SA and 1SB can be added constructively to produce a bonding orbital, or with opposite sign they add destructively to produce an antibonding molecular orbital. This describes the system quite well. The bonding orbital will have lower energy and create a more stable system. There has to be an increased density of electrons between the nuclei in order to form a molecule. The node in the antibonding MO decreases the density electrons and decreases the stability required to bring the two protons together. 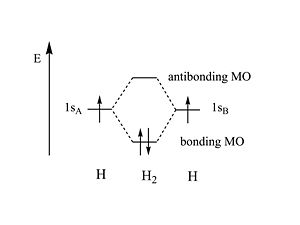 Energy levels for hydrogen electrons before and after bonding.