The literature can be confusing in using the terminology of electronic states vs electrical levels.

Molecular states (which is what you can observe) is a wave function that results from all the electrons in the molecule. 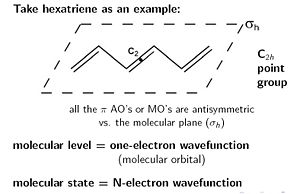 There is always an identity symmetry (E). The hexatriene molecule is symmetrical around the C2 axis. The C2 axis is perpendicular from the plane of the molecule. A rotation of 180 degrees brings the same structure. The σ h denotes symmetry above and below the plane, there must be the same electronic density above the plane as below. There is also an inversion symmetry (i) where the C2 axis meets the plane. These together have a point group called C2h. 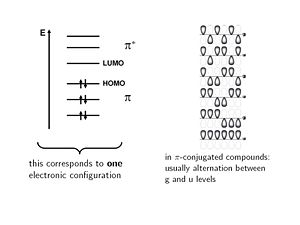 The wave functions can be classified according their symmetry. The lowest level is the fully bonding an is unsymmetrical; it is labeled ungerade (u- german for odd). The next level up has a node in the middle and it is symmetrical and is labeled gerade (g - german for even). In π conjugated systems molecular orbitals alternative between gerade and ungerade with each level.

In polyenes the ground state with all π and σ levels doubly occupied is denoted Ag symmetry, or 1Ag. This is also called state S0.

The lowest ground stat π-type excited states can be of Ag or Bu symmetry. 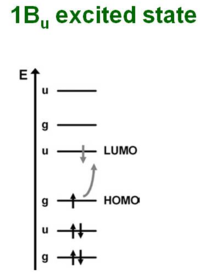 This can be noted using Dirac notation.

The integral over all space of initial state gerade (g) the the dipole operator (r) and the wave function for the final state (u). In order for the integral to non zero the product for all three terms must be even for a level. Therefore the transition to the 1Bu excited state is possible. 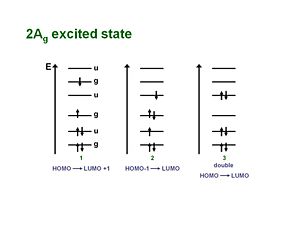 For a long time the one-photon allowed 1Bu was thought to be the lowest possible excited state for a polyene molecule also called S1 (the lowest singlet excted state). But the papers by Hudson and Kolher showed that the lowest excited state in a long polyene is actually the 2Ag (the second state of Ag symmetry). There is not a single electronic state that dominates that wave function. One involves the promotion from HOMO to the LUMO plus 1 which is gerade. A second case promotes an electron from the HOMO-1 to the LUMO, which is also gerade. There is also a doubly excited situation in which two electrons are promoted from the HOMO to the LUMO resulting in a gerade state.

As long as they have the same symmetries they can mix. These three configurations have approximately the same energies so they can mix strongly. They are one photon forbidden (but two photon allowed). This results in a 2Ag state that is energetically lower than the 1Bu state, thus it should be considered the S1 state. 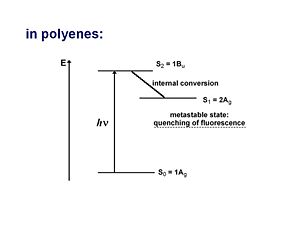 Transition from 1Bu to 2Ag results in a metastable state.