It helpful to become familiar with the geography of the electromagnetic spectrum. Try to memorize some common wavelengths, frequencies, energies and associated timescales. 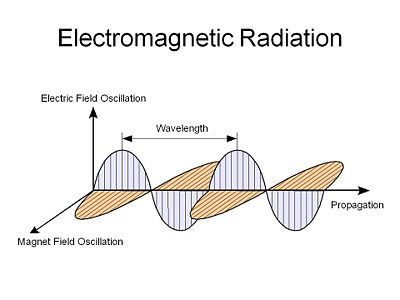 The Nature of Light

Formally, the term “light” is strictly applicable to the visible portion of the electromagnetic spectrum, however we will use a looser definition that includes the entire visible and non-visible spectrum.

Light behaves both as wave with properties of wavelength and frequency and as particle in that it is quantized in discrete packets known as photons.

is wavelength is measured in nanometers (nm)

is frequency (1/T Period T in seconds) measured in Hertz

Light as a wave

The light waves can be described as:

= wave vector or wavenumber in cm-1

x is direction of travel

is the phase constant that accounts for a non-zero amplitude at the origin of the plot.

Light as a Particle

The energy of the light beam is embodied in as particles called photons.

Which can be divided by the charge of the electron 1.6 x 10-19 coulomb to give a microscopic equivalent of

In the ultraviolet photons have 3 to 30 eV energies, in the range of 100 to 1000 eV there are soft x-rays, and beyond that hard x-rays. The visible spectrum has wavelengths of a nanometer. But in the soft x-rays wavelengths are in the order of angstroms. This is why you can use the diffraction of soft x-rays to explore the crystal structure of molecules; the wavelength is in the approximate scale of that of atoms and bonds. Gamma rays are in the range of mega eV.

On the lower energy end of the electronmagnetic spectrum there is the infrared. The IR spectrum of a π conjugated system reveals the bond stretching of a CC double bond at about 1600 wave numbers or about .2 eV and the frequency in the sub picosecond regime. A π conjugated molecule in an excited state undergoes bond length relaxation in few tenths of a picosecond. Motion of molecules as a whole involve 20-50 wave numbers in the millivolt scale, and timescales of 10-100 pico seconds.

Beyond that the microwave and radio wave have wavelengths that are very large, in the mega or kilohertz. It is useful to keep in mind the relations between the wavelengths, spectrum and energies.

Try your hand at The EM Quiz 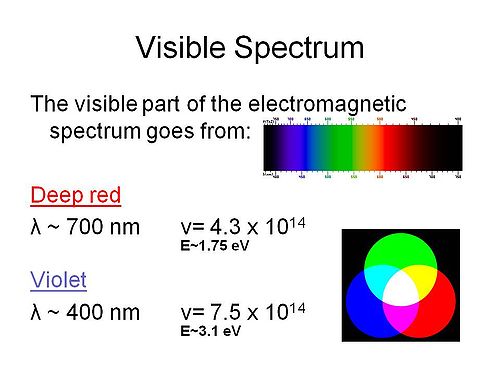 The visible is a very small part of the electromagnetic spectrum, from 700nm on the low energy red side to 400nm on the high energy violet side

The energies of the spectrum vary from about 3eV on the violet side to 1.5eV on the red side in approximate terms. The frequencies are in the mid 1014 scales. This is important because it determines the time scales for events. For example an event such as energy transition in a π conjugated system which will be 2 or 3eV, this is in the range of the visible spectra frequencies so the timescale for that process will be in the femptoseconds.

Converting from wavelength to eV

It is possible to quickly convert from wavelength to electron volts (E) using:

is the speed of light.

Simple divide the wavelength in nanometers into 1240 to calculate the eVs.

We have now developed lasers with pulses less than a femtosecond. But if you have a pulse that is on the order of one femtosecond, the precision on the energy can be as large as few eV. The faster the pulse, the less the precision of energy. If you are trying to study energy very accurately you don’t want to use the fastest pulses because it hurts the accuracy of your energy measurement. Its better to stay with picosecond laser pulses for this. If, on the other hand, you are trying follow chemical reactions in real time, then you need to go with faster and faster lasers at the expense of energy information precision. This is all a result of Heisenberg's uncertainty principle.