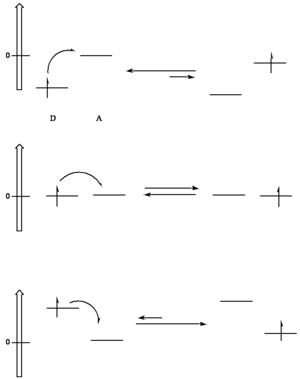 Electrons eventually end up in the lowest energy level relative to the reference level.

Why do we use reference orbital?

The driving force for an electron in an orbital to be transferred (donated) to another orbital (an acceptor orbital) is related to the difference in energy between the orbitals not the absolute energy.

In the diagram in each case the electron will end up on the lowest relative energy level. In organic chemistry we often think of CH3O and (CH3)2N as donors even though nitrogen and oxygen are more electronegative than carbon (i.e. their orbital are lower in energy than carbon?

First to be fair we should compare orbitals with equal occupancy and if we compared CH3O and (CH3)2N to (CH3)2C– we would think that the carbanion was a better donor than the methoxy group or the amino group.

Effect of adding donors and acceptors

Molecular orbitals of ethylene with added donor or acceptor groups

Consider what happens to the molecular orbitals of ethylene when we attach donors or acceptor groups to them.

The same arguments will hold in reverse for the acceptor case. The LUMO is going to go down, and become easier to reduce. Adding an amine makes it easier to oxidize and decreases the gap.

Donor and Acceptor on Ethylene

Consider this series in which two orbitals like ethylene behave as donor and acceptor.