The purpose of this kit is to introduce students about the basic properties of light such as color, straight beams, reflection, refraction and polarization. Each of these phenomena can be presented in a “discovery” mode in which students related their current knowledge by guessing what will happen. At a higher level some of the phenomena can be explained with formulas and confirmed with measurements. Following each demo description are ideas of how to tie the demo into the CMDITR science. 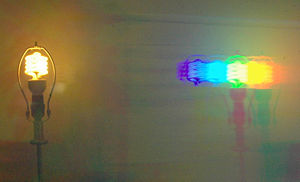 White light is composed of many colors. Pass around the diffraction grating. Have them describe what they see. Are the colors the same for any light you look at? The diffraction grating is able to split white light into colors that make it up. (The diffraction grating works because of constructive and destructive interference, but this is higher level concept.) Students may be able to notice that the colors difference between an incandescent bulb, and LED and fluorescent bulb shown below. Connect this idea to other sources of rainbows colors such as a rainbow (reflection and dispersion within a drop of water), oil sheen on water (interference between nanolayers), or prisms (transmission and dispersion). 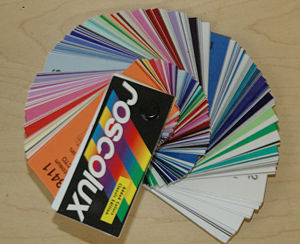 Light can be absorbed. Ask students what they know about color.

a. Pass out colored filter samples and have students look at the room. Which color filter makes the light of a certain color go away? Colored filters absorb different colors and let other colors through. The deluxe filter paddle also has a polarizing filter and a diffraction grating.

b. Ask which color paints are mixed together to make other colors. Is it possible to make white paint by mixing colored paints? (No this is because each color absorbs another part of the spectrum. If you added enough colors together eventually to would absorb all the light making black.) Have student pick three colors from the sample pack that when combined makes black or grey.If an organic solar cell appears red colored what does tell you about its absorption spectrum? The color of reflected light from a material represents the color of light that is not absorbed.

c. Print out the “red reveal” hidden message sheets. Ask students to find a filter that reveals the hidden message. The red filter will mask all the colors that are similar to red in the picture. This makes cyan, blue and purple layer that shows up as black because light from these is blocked by the red filter. Red and yellow on the design show up as white when viewed through the red filter. You can also learn how to make a red reveal message.

The color of light can be described by wavelength. You may not notice it but every light has its own unique color. A spectroscope is an instrument that lets you measure all the colors present in a light source.

a. Point the spectroscope at a fluorescent light. Notice the green line that appears at the 5450 mark. Fluorescent bulbs are actually a little bit green. Some street lights are blue or even orange. This color depends on the chemistry of the materials used in the bulb.

b. Now place a color filter #89 that only transmits color in the green part of the spectrum. Notice that the red line disappears from the fluorescent spectrum. Try using other filters to isolated different lines. What rule can you come up with about what color filters do to the full color spectrum of light? ( A color filter blocks all colors except for the color it appears to be. Similarly reflective colors absorb all light except for the color they can be observed to reflect) 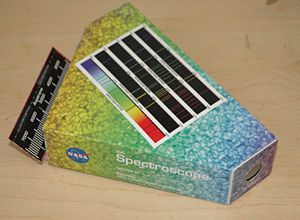 Some portions of the electromagnetic spectrum is invisible. Point out the colors on the electromagnetic spectrum chart and show that some types of radiation are not visible. Pass out some UV beads. These are photochromic beads which change color in the presence of UV light but revert to white in the dark. Ask students if all light is visible. Have them place the beads in various places around the classroom under lights, in the dark and in the sun. Explain that UV light is invisible but very powerful and is the cause of sun burns. 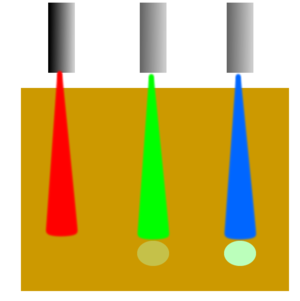 Phosphorescent paper is only excited by certain colors of light.

Some materials absorb light and then continue to emit it over time. Some colors of light do not have enough energy to excite these substances. Turn off the lights in the room. Use the three colored flashlights, the white flashlight, daylight and the red laser to stimulate the glow-in-the dark paper. The red light should not be able to make it glow even though the laser pointer is very intense. This is because the chemical in the paper requires a minimum energy of light in order to excite its electrons to a higher energy level. Once the higher level is reached the energy slowly decays back to the ground state emitting light that is observed as glowing. 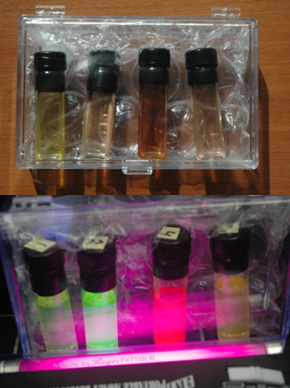 Quantum dot solutions in visible light above, and UV light below.

Materials can be made that designed that absorb and emit radiation at specific wavelengths. These vials contain extremely small 2-5nm particles of cadmium selenium that have been grown to specific sizes because of their light absorbing qualities. These particles exhibit fluorescence; they absorb light at one color and emit light at a different wavelength. In the visible spectrum they absorb and emit yellow and pale red. They absorb ultraviolet and fluoresce in green, red and orange.

a. Examine the vials in regular light. Predict what color the vials will appear under UV light.

b. Expose the vials to UV light and discuss why this is different.

Electricity can be used to excite a material and make it emit light. Electroluminescent panels have a transparent conductor layer, a layer of phosphor and a metal back electrode. When the front and back electrode are energized with a high frequency current the phosphor in between is stimulated and emits light. 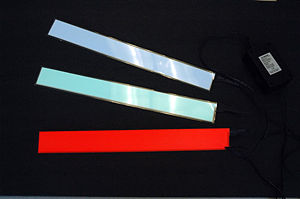 A laser reflects within a piece of plastic

Light goes in a straight line until it interacts with matter. All light sources produce beams of light. Lighting usually produces many beams going many directions. a. A laser produces a very bright, focused beam. Use the laser show the path of a light beam. Laser light is used to guide rockets, in surveying or carpentry to line things up, or even to guide farm machinery. Place the laser along a flat surface such as the floor or table and show that it is not affected by gravity.

b. Fill the plastic tub with water and add some powdered milk powder to make the light beam visible. A tub of clear gelatin can also be used for this demonstration. 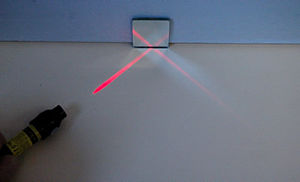 Light can be reflected. First ask what kinds of objects reflect light. Test the theories about what will reflect by pointing the laser at the objects that are suggested. They should be able to describe the quality of shiny, glassy or metallic being needed for mirrors. Place a mirror on the block which is attached to a protractor. Place the cylinder lens end tip on the laser so that it produces flat line instead of a dot. Orient the line so it is vertical (with the cylindrical lens horizontal). This will make it easier to see the light ray and its reflection on the table. Use the protractor to measure the angle of light coming in (angle of incidence) and the angle of reflection. What is the rule for this? (the angle of incidence equals the angle of reflection) Challenge: what arrangement of mirrors would be needed to reflect a laser beam into a complete circle? Optical fiber has smooth surfaces and narrow diameter. Light reflects inside the tube until it emerges from the end. This is called total internal reflection.

Refraction with grow cubes and prisms

Light can be refracted. One day before the demonstration place several of the optic grow cubes into water in a plastic bag. Each cube will expand into a 3 cm, optically clear cube. Use the single edge razor to cut the cube into various shapes used in optics. Alternatively cast a sheet of clear gelatin using three times as much gelatin as is called for on the recipe. Use the laser pointer to show how lenses and prisms work. Try making a convex lens, a concave lens, an equilateral prism, a fiber optic tube, a periscope with right angle prisms. 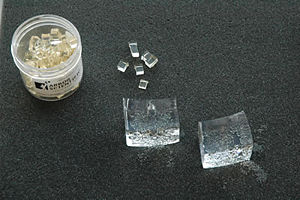 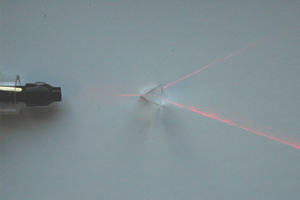 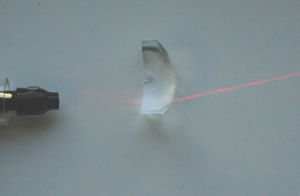 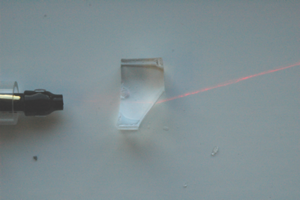 Use the acrylic prism set to demonstrate various optics phenomena. If possible use two lasers to show parallel beams. 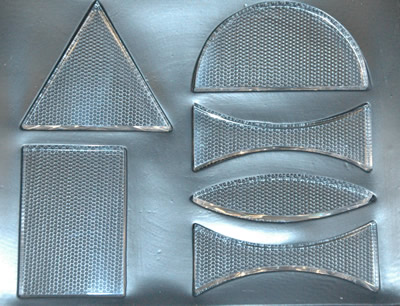 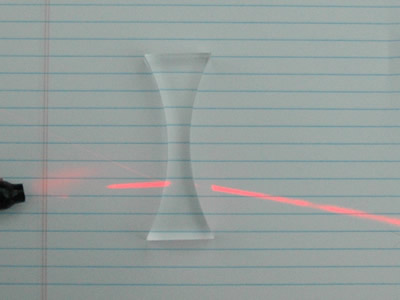 Use the barrel lens attachment to the laser pointer to demonstrate refraction in the acrylic lens. 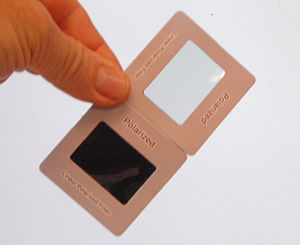 Light waves can be random or polarized in one direction. Polarized materials only allow light with a certain orientation to pass through. Have two students hold the nylon rope and generate a wave in the crossways direction. Place two straight back chairs back to back on either side of the rope so that it’s horizontal movement is limited. The waves will be dampened. Ask the students to generate a wave in the up and down direction. This will pass through between the chairs. This how a polarized light is blocked or passed through a polarizing filter.

Use the polarizing filters to show that light from a laser or from an LCD monitor can be almost completely blocked as the filter is rotated. Two filters can be used to block non polarized light. 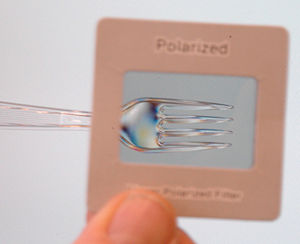 Clear materials such as plastics can change the polarity of light when they are under stress because their molecules get aligned in a certain way by forces. If you place a clear plastic spoon between two polarizing filters or between an LCD monitor (a polarized light source) and a polarizing filter you can see rainbow colored patches where light is being blocked or refracted in response to stresses in the material. 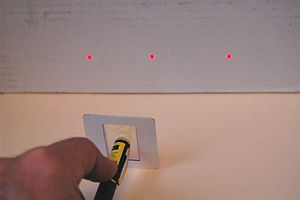 Lasers light is coherent and a precise wavelength. Place a diffraction grating in front of the laser pointer and shine it at a wall (never look into laser). There will be three dots, one for straight transmission and two diffracted dots on either side. Compare this to the pattern that appears from looking at a fluorescent bulb with a diffraction grating.

Hands On Optics from OSA, SPIE and NOAO

Lighten Up - OSA and Girl Scouts

Sources for Building your own kit