The first experiments to generate light from organic materials were conducted in the late 1950s and early 1960’s at places like RCA. These studies were driven by the hypothesis that organic materials would act as efficient light sources and would also serve as organic photoconductors.

Scientists used fine slices of highly purified anthracene (C14H10), approximately 5mm thick, connect them to electrodes, and apply 100-1000 volts. If the system did not short there would be faint blue light emission. Often there would be a lightning bolt-like discharge and graphite was produced instead of light. The high voltages were needed to overcome the internal resistance to charge migration (Rs) in the organic solid. The relatively large thickness of these slices was an experimental necessity – pin-hole-free ultrathin film deposition technology was not yet available for organic materials. Emission was seen occurring near the cathode, suggesting that charge recombination occurred closer to this electrode than the center of the device.

Subsequent experiments used thinner slices of anthracene (50 microns) with a semitransparent gold electrode and a silver paste cathode. Lower drive voltages were required, and light emission through the semitransparent anode was observed. Despite the relatively high external quantum efficiency of these devices, it was clear that substantial materials development would be necessary before real display devices would be realized. The cited review by Dresner shows a substantial understanding of the physics of these light emitting organic thin films, which extrapolates directly to our understanding of OLEDs today.

In these early devices, the rate of transport of the positive cation radical (or hole state) and the transport of the electron rich state were not equal, causing the recombination to occur near one of the contact electrodes. This phenomenon is now known to inhibit device efficiency.

How is Light Generated? 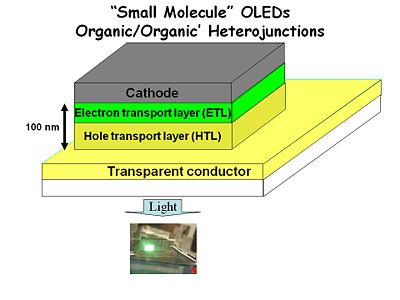 The first practical OLEDs were built in the late 1980’s by Ching Tang and Andy Van Slyke at Kodak.

C.W. Tang and coworkers at Kodak used spin casting and sublimation deposition of the organic components of the device, with patterned electrodes on the top and bottom. This was an important technological advance over slicing single-crystal anthracene as thin as possible with a razor knife. Vapor depositing molecules in a vacuum system on top of a transparent conductor enabled the layers to be much thinner, and have almost none of the pinholes that cause shorts. Transparent conducting oxide (TCO) thin films on glass served as the anode and allowed light to be emitted in a usable fashion for displays.

The keys to successful development of these first devices was control of organic film deposition to create a pin-hole free film (with high RP) which was thin enough to yield a lower series resistance than the first anthracene devices, producing light emission with drive voltages under 50 volts. These devices produced about 15 candelas per square meter: dim but visible light. (A typical CRT computer screen operates with 100-200 candelas per square meter.)