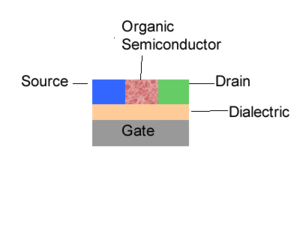 The first one is the injection of charges into the semi-conductor. In the case of light-emitting diode and photovoltaic cell there are only two electrodes. However, in a field-effect transistor, the charge injection is modulated through a third electrode called a gate. Now all is needed are the electrons and the holes. Let’s suppose you inject electrons. Those electrons must migrate and be collected. The first electrode will be referred to as a gate. Next there is a thin insulator called a dielectric. You have two other electrodes referred to as the source and the drain. The organic semi-conductor sits between these. This is one of the configurations possible.

When there is a voltage difference between the source and drain, the amount of charges that will be injected into the semi-conductor will be modulated by the voltage at the gate. The gate will modulate the injection and produce a switching effect. For a given voltage between the source and drain, the voltage of the gate can either be decreased such that there is a small injection or current or it can be increased to have a very large injection of charges into the semi-conductor and a large current. These are the components that make a transistor also called a three terminal device because there are 3 electrodes.

Following injection of charges into the organic semi-conductor, those charges will travel and be collected at the other electrodes.

is the current between the drain and source

is the Voltage between gate and source

Use this simulation to explore N-type, P-type and ambipolar semiconductor polymers in an organic field effect transistor.

You can control the gate voltage and the voltage across the circuit.