The Pioneer car stereo was one of the first green and blue OLEDs to reach the market.

Polymer OLEDs have an emissive layer of polyphenylenevinylene derivatives which are spin-cast or deposited with an inkjet printing process. The first polymer OLEDs consisted of two different polymer materials with different ionization potentials and electron affinities to create a heterojunction. These were capped with calcium or magnesium, and more recently with aluminum or other more stable metals. 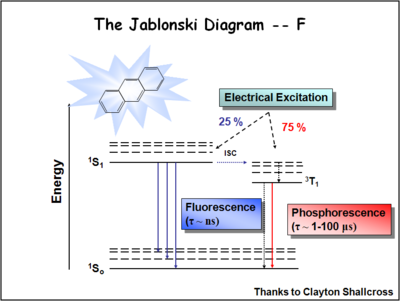 The Jablonski diagram shows a dopant molecule that can be excited from its singlet state to its first excited singlet state by overlap of its absorption with the emission from the host dye such as aluminum quinolate. The first dopants were primarily fluorescent dopants which shift the energy of the emission of the device slightly more to the red and improve the efficiency and stability of the device. The holy grail is to identify dopants which can capture the energy in the triplet state, which is 75% of the energy in the system. 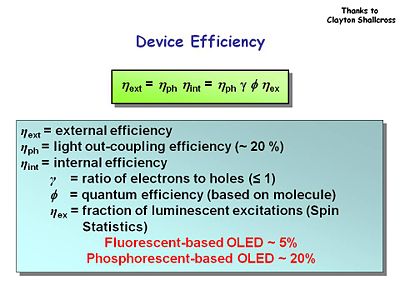 External efficiency is a measure of how much light is produced given the power supplied.

External power efficiency is a product of the light out-coupling efficiency and the internal efficiency. Typical OLEDs only emit about 20% their light in the forward direction. The remaining energy is lost in substrate or waveguide modes which go to the side, which opens intriguing possibilities for sensors. Internal efficiency is related to the efficiency of all the components in the OLED.

= ratio of electrons to holes typically ≤ 1. There is an energy loss due this imbalance.

The quantum efficiency can also be written

You can increase device performance by balancing charge injection (γ). Single anthracene crystal devices had an efficiency < 1%. The first double-layer devices increased efficiency to 1%. The first doped devices used DCM2- a cumarin dye used in some dye lasers. It was doped at a high level of 10% works as a energy acceptor from the Alq3 host and it boosted the external efficiency to 2.5%. It is an orange–red emitter which moves the emission from green to the red part of the spectrum. 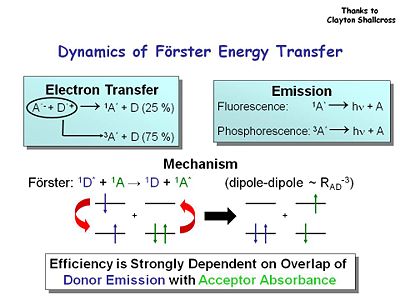 Förster is a non-radiative transfer of energy from a donor to an acceptor.

You can also increase device performance by increasing Φ using energy transfer. Consider the dynamics of Förster energy transfer. Spin statistics dictate that 75% of the electron transfer is in the triplet state. In the case of emission, the singlet state gives you fluorescence, and phosphorescence comes from the decay of the triplets state back to the ground state. It would be best to capture the energy from both states. Energy efficiency is strongly dependent on the overlap of donor emission with acceptor absorbance. 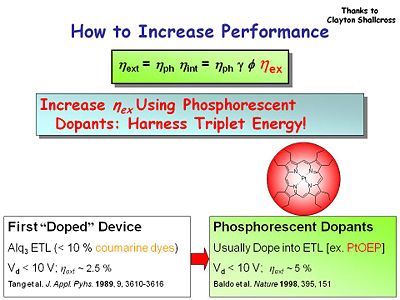 Phosphorescent dopants such as the heavy metal porphyrin PtOEP can increase efficiency to 5%. The heavy metal increases the probability of intersystem crossing.

The mechanism of triplet energy transfer, called Dexter energy transfer, involves the exchange of an electron. This has a much closer distance-dependence than Forster transfer. The right phosphorescent dyes create triplet states at relatively low concentrations of these energy acceptors. Efficiency is strongly dependent on the orbital overlap between the donor and acceptor system. Heavy metal atoms such as platinum and iridium help to mix the singlet and triplet states by spin-orbit coupling. 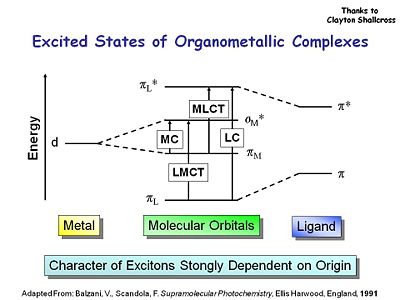 See Balzani 1991 [4], for a review of the rules for design of phosphorescent dopants. 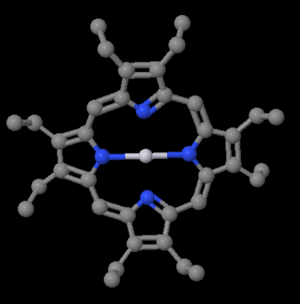 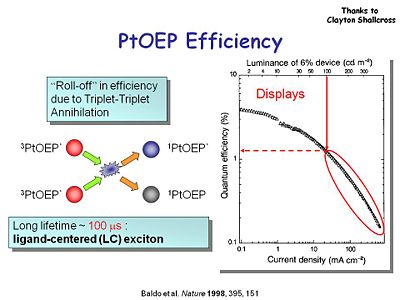 It is important to look at the quantum efficiency for these devices as a function of the applied current density. The optimal system will maximize light output while minimizing the current injected into the system. At a threshold luminance of 100 candelas per square meter (about the about the intensity of a computer screen display), PtOEP has a quantum efficiency of 1% and current density of 10 mA per square centimeter. This is not bad but could be better. PtOEP might not be the best choice for an emitter because of its long lifetime of 100 microseconds. Some energy will be lost through this phosphorescence because it lasts so long and there are other non-radiative decay processes that suck energy away.