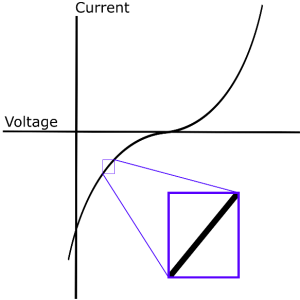 
For a generalized expression of impedance, Z, the previously stated conditions for Ohm’s law are relaxed, and the time-dependent expressions for V and I are substituted into Eq. 1:

(b) Fig. 3 (a) Graphical and (b) mathematical representation of circuit elements in parallel.

(b) Fig. 4 (a) Graphical and (b) mathematical representations of an RRC circuit, or Simplified Randles cell. This circuit is known as the Simplified Randles Cell, which can be used to model processes with a single electrochemical reaction, such as iron corrosion in an anaerobic aqueous environment. Further details on relating this EEC model to a kinetic model can be found in Example 10.1 of Ref. 3. If we further manipulate the equation in Fig. 4(b), we can separate the expression into its real and imaginary parts: (8) Z_Re=R_s+R_r/(1+ω^2 〖R_r〗^2 〖C_dl〗^2 ) Z_Im=(-jωC_dl 〖R_r〗^2)/(1+ω^2 〖R_r〗^2 〖C_dl〗^2 ) 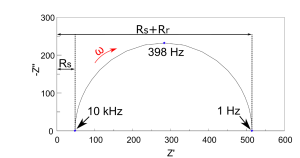 Fig. 6 Bode Plot of a Simple Randles Cell with values Rs=47 Ω, Rr=467 Ω, and Cdl=860nF As a final note on EIS, it is commonplace to find area-specific impedance data, which is achieved by multiplying the real and imaginary parts of the impedance by the electrode cross-sectional area.