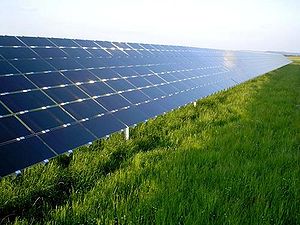 CdTe-based thin-film solar cell modules currently represent one of the fastest-growing segments of commercial module production. This is due partly to the simplicity of the two-component absorber layer (i.e., CdTe contains only cadmium and tellurium) and the ability of bulk cadmium telluride source material (in the form of high-purity powders) to be reconstructed into the CdTe thin films needed to produce PV modules. During the 20+ years of research undertaken by the CdTe Group, much effort has been directed at producing CdTe structures that allow more light to penetrate the top layers of the device (the transparent conducting contacts and cadmium sulfide [CdS] layers) to achieve high efficiency. This understanding has been transferred to commercial processes for use in producing higher-performance modules.

Schematic illustration of a typical CdTe superstrate thin-film PV device. In this design, the layers of the device are deposited onto a glass "superstrate" that allows sunlight to enter. The sunlight passes through the glass and produces electrical current and voltage in the lower layers. The world-record NREL CdTe device is based on this structure and demonstrates a conversion efficiency of 17.0%. 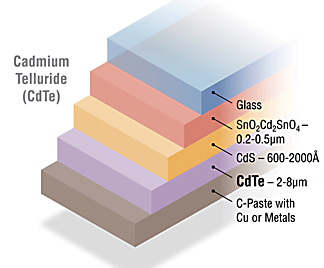 Schematic illustration of a typical CIGS substrate thin-film PV device. In this design, the layers of the device are deposited onto a glass, metal, or polymer substrate. Sunlight enters through the top layer of the device (the transparent conducting oxide) and produces electrical current and voltage in the lower layers. The world-record NREL CIGS device is based on this substrate structure and demonstrates a conversion efficiency of 20.0%.

CIGS-based thin-film solar cell modules currently represent the highest-efficiency alternative for large-scale, commercial thin-film solar cells. Several companies have confirmed module efficiencies exceeding 13%. Most of these companies are using ideas and intellectual properties that were developed by the NREL CIGS Group during the past 20+ years of research. Central to this understanding was the group's development of the "three-stage process." This process enables the formation of a CIGS thin-film layer that is of the proper composition and structure to allow the charges generated by sunlight (i.e., electrons and holes) to exist long enough in the CIGS layer of the device so that they can be separated and collected at the front and back contacts. This separation and collection is critical for demonstrating high conversion efficiency.

CIS cells are made with a thin layer of CuInSe2 on plain glass or flexible metal backing. CIS cells haves up to 14% efficiency with similar durability as silicon solar cells. Thin-film technologies like CIS have an advantage over conventional silicon solar as they are much less expensive to manufacture and are considerably more versatile and flexible. There is some efficiency trade-off, however, and currently CIS cells and variants (such as CIGS and CIGSSe) make up only around 2% of the market for solar.

CIGS is a variant of CIS and consists of a thin layer of copper indium gallium diselenide Cu(In, Ga)Se2 (CIGS). CIGS cells have up to 10% efficiency with similar durability as silicon solar cells. Since they are a thin film technology, they can be less costly than crystalline silicon, as well as more versatile and less temperature-sensitive. CIGS cells are more efficient than a-Si, but less efficient and more costly than competing CdTe solar cells. Another drawback to CIGS cells is that Indium is a relatively rare metal, and is supplied mostly from China. CIGS cells have a major advantage over CdTe cells because they are relatively non-toxic, while the cadmium used in CdTe cells is highly toxic on its own.