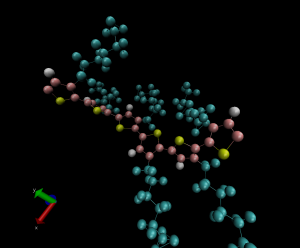 <math>K_(b,ij)</math> = bond energy constant for bonded atoms i and j, units of energy/(distance^2 )

<math>b_ij = </math>distance between bonded atoms i and j, units of distance

<math>b_{ij} =</math> distance between bonded atoms i and j, units of distance

<math>\theta_{ijk} = </math>angle between bonded atoms i, j, and k, units of degrees

<math>r_{ij} =</math> distance between non-bonded atoms i and j, units of distance

<math>q_i, q_j = </math>charges of non-bonded atoms i and j, units of elementary\ charge

Classical mechanics are used to determine the forces each atom experiences due to these bonded and non-bonded interactions as well as the direction and speed at which they move in response to those forces. Following Newton’s second law of motion and utilizing the force field in equation (1), the force can be defined as1,6: <math>F=ma=-\frac{\delta V_{FF}}{\delta r}</math>(2) 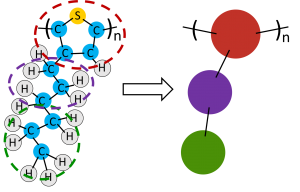