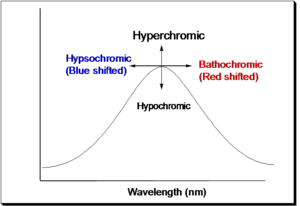 Changes in chemical structure or the environment lead to changes in the absorption spectrum of molecules and materials. There are several terms that are commonly used to describe these shifts, that you will see in the literature, and with which you should be familiar.

Bathochromic: a shift of a band to lower energy or longer wavelength (often called a red shift).

Hypsochromic: a shift of a band to higher energy or shorter wavelength (often called a blue shift).

Hyperchromic: an increase in the molar absorptivity.

Hypochromic: an decrease in the molar absorptivity. 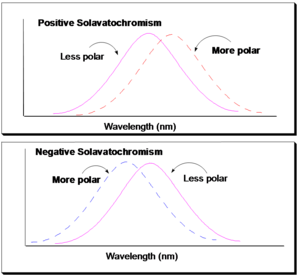 Solvatochromism is the property of a molecule changing its color as a function of the solvent polarity. But it is actually more complex than that. It can be related to the solvent polarizability as well. Basically it is the change in the color of a material, or change in the spectrum, as a function of the dielectric properties of the solvent. The dielectric properties of the solvent have polarizability and polarity built into them. Therefore, if molecules go from a less polar solvent to a more polar solvent and a red shift or a bathochromic shift occurs, then the substance is referred to as being positively solvatochromic. Conversely if you put molecules into a more polar solvent and a blue shift occurs, i.e. higher energy, the molecules are referred to as being negatively solvatochromic.